While voters head to the polls in nine states for primary elections, Donald Trump denies that he knows who David Duke is, what the KKK is, and what a white supremacist is. Another unmissable edition of Democracy Now! with Amy Goodman, provided by the Pacifica Radio Network. 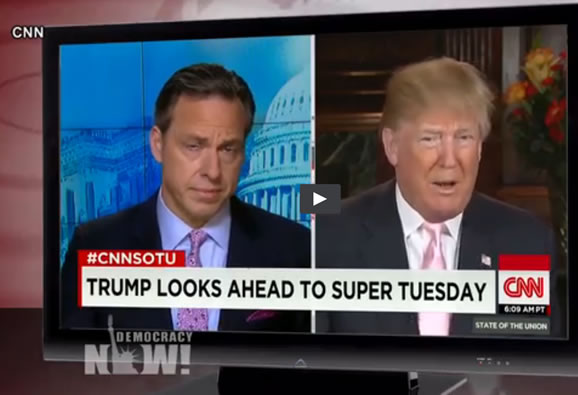 Super Tuesday has arrived. It’s one of the most important days of voting in primaries and caucuses in the the 2016 presidential campaign. Republicans and Democrats each go to the polls in 11 states. About a quarter of all delegates are at stake. The five Republican presidential candidates will compete in contests in Alabama, Alaska, Arkansas, Georgia, Massachusetts, Minnesota, Oklahoma, Tennessee, Texas, Virginia and Vermont. Democratic voters will decide between their two candidates in similar states, except Alaska, and also in Colorado and American Samoa. Recent polls show billionaire Donald Trump could win at least eight of the 11 states.