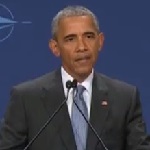 Vermont Senator Bernie Sanders is expected to endorse former Secretary of State Hillary Clinton today. On Sunday, Sanders sent out a release praising the adoption of what he called the “most progressive platform in the history of the Democratic Party.” Also, President Obama is speaking in Dallas, Texas, today at a memorial service for the five Dallas police officers killed by a sniper Thursday evening. 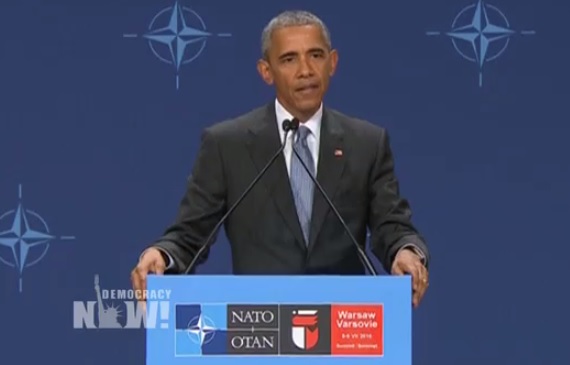 Vermont Senator Bernie Sanders is expected to endorse former Secretary of State Hillary Clinton today at a joint rally in Portsmouth, New Hampshire. The rally comes less than two weeks before the start of the Democratic National Convention. Clinton assumed the mantle of the party’s presumptive nominee after winning the California primary in June, but Sanders refused to concede the nomination in part to give his campaign greater power to push the party to adopt a more progressive platform. On Sunday Sanders sent out a release praising the adoption of what he called the “most progressive platform in the history of the Democratic Party.”

Rep. Keith Ellison (D-MN) was one of the five people picked by Bernie Sanders to serve on the Democratic National Convention’s Platform Committee. “It takes a position in favor of $15 and a union for a federal minimum wage. It takes a position on a whole range of things, including the environment, that are progressive steps forward,” Ellison said. “What do we not achieve? Compete opposition to fracking; we don’t have that. What is else not achieved? There’s some things on foreign policy fronts that, I think, would and could be better; some saber rattling with regard to Iran that I don’t think is helpful.”

The Democratic Party platform committee held its last meeting in Orlando, Florida, over the weekend ahead of the party’s convention at the end of this month. The meeting of Clinton and Sanders delegates resulted in what’s being called the most liberal Democratic platform in a generation.

The draft platform still needs to be ratified at the Democratic National Convention in Philadelphia, but it is already widely being touted as a victory for Sanders. Sanders appointed five members to the committee earlier this year, including scholar and racial justice activist Cornel West, leading environmentalist and 350.org co-founder Bill McKibben and Minnesota Congressmember Keith Ellison, who chairs the House Progressive Caucus.

The new platform includes Sanders’ call for a $15 per hour minimum wage, Social Security expansion and a carbon tax to price its impact on the environment. Award-winning documentary filmmaker and Sanders delegate Josh Fox guests on the show. He’s the director of “How to Let Go of the World and Love All the Things Climate Can’t Change,” which premiered at the Sundance Film Festival earlier this year and is now playing on HBO.

Ahead of the Democratic National Convention, the television and film actress Shailene Woodley has launched a cross-country caravan campaign to bring people to the DNC in Philadelphia. Dubbed the “Up To US Caravan to the DNC,” Woodley is hoping to bring grassroots activists — including many Bernie Sanders supporters — to the DNC. Woodley appeared in the TV series “Secret Life of the American Teenager” and has starred in films including “The Divergent Series” and “The Fault in Our Stars.” She received a Golden Globe nomination for her role as Alex King in “The Descendants,” in which she starred alongside George Clooney. She spoke to Amy Goodman.

President Obama is speaking in Dallas, Texas, today at a memorial service for the five Dallas police officers killed by a sniper Thursday evening. Dallas authorities said Micah Johnson, the sniper, managed to amass a personal arsenal including a semiautomatic SKS rifle, bomb-making materials, bulletproof vests and ammunition. Over the weekend President Obama warned that the easy access to guns nationwide has exacerbated divisions between the police and local communities.