El Chapo is Caught, But Corruption, U.S. Consumption & Failed Drug War Keep the Cartels in Business. We are honored to offer this broadcast as part of our affiliation with the Pacifica Network.

The Mexican government has moved toward extraditing drug lord Joaquín “Chapo” Guzmán to the United States after his recapture in Mexico on Friday. Guzmán’s drug cartel is said to be one of the most powerful in the world. But it’s unclear how much of an impact his arrest will have on a drug war that has killed tens of thousands in Mexico over the past decade. Critics say that if sensible drug laws were established in Guzmán’s chief market—the United States—drug lords like him would not be in business. We are joined from Mexico City by two guests: Laura Carlsen, director of the Mexico City-based Americas Program of the Center for International Policy, and Elena Poniatowska, a founder of the newspaper La Jornada and one of Mexico’s most beloved writers. 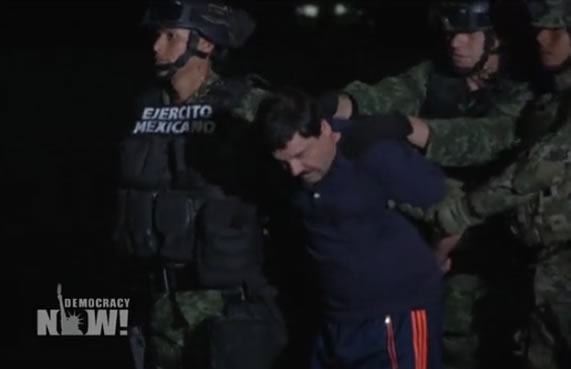