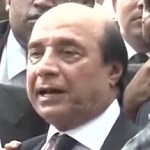 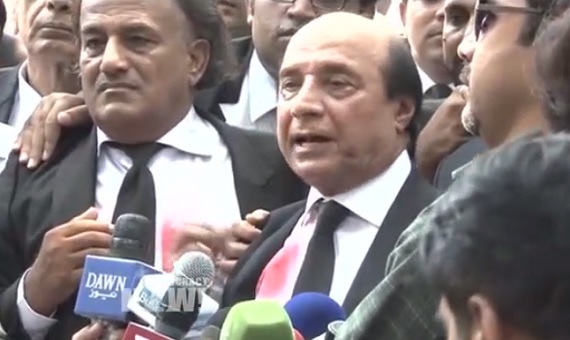 Latif Khosa, a Pakistani attorney, speaks out about the bombing. Image: video still

The suicide bombing targeted lawyers who had assembled outside the hospital to mourn the assassination of Bilal Kasi, the president of the Balochistan Bar Association, who was killed earlier on Monday as he headed to court. Kasi had strongly condemned recent attacks in the province and had announced a two-day boycott of court sessions in protest of the killing of a colleague last week. A faction of the Pakistan Taliban, Jamaat-ul-Ahrar, claimed responsibility for Monday’s attack and for the murder of Bilal Kasi. ISIS also claimed responsibility.

On Monday, protesters interrupted Donald Trump more than a dozen times during a speech at the Detroit Economic Club, in which Trump laid out his economic policies. During the speech, Trump vowed to slash corporate taxes and end the estate tax. He also said he would reject the Trans-Pacific Partnership and renegotiate trade deals including NAFTA. Jacqui Maxwell, a crane operator and a member of the United Auto Workers, interrupted Donald Trump’s speech at the Detroit Economic Club on Monday.

This comes after Donald Trump announced his economic team, which includes 13 men, no women, several billionaires, an Oklahoma oil baron and one part-time professional poker player. For more on Donald Trump’s speech economic plan and his team, Matt Taibbi, an award-winning journalist with Rolling Stone magazine, joins the show. He’s been closely following the Trump campaign. One of his recent pieces is headlined “A Republican Workers’ Party?”

Taibbi also discusses the news that British banking giant Barclays Bank has agreed to pay $100 million in a settlement with 44 U.S. states for rigging Libor, the interest rate which underpins trillions in global transactions. British and U.S. authorities have taken action against a number of banks over alleged rate manipulation since 2012. This was the first settlement between a bank and U.S. states.

Chicago is once again rocked by protests over police brutality, following the release of video showing the fatal police shooting of an unarmed African-American teenager. The newly released video from police body cameras shows the moments before and after police killed 18-year-old Paul O’Neal on July 28. In the video, police are seen shooting repeatedly at the car O’Neal was driving, which police say was stolen.

The video then shows a police officer running over to O’Neal, who is lying face down in a growing pool of blood surrounded by other officers. The officers then handcuff O’Neal with his arms behind his back and search his backpack, as he continues bleeding. The Cook County Medical Examiner’s Office says he was shot in the back.

In New York City on Monday, over 100 people marched to protest the recent police killing of African-American mother Korryn Gaines in Maryland. On August 1, Baltimore County police killed the 23-year-old mother after what they say was an armed standoff. Police were at Gaines’s apartment to execute an arrest warrant related to a traffic violation. They initially said they entered Korryn Gaines’s apartment with a key obtained from her landlord. But court documents say police kicked down the door.

Once the police entered the apartment, Korryn Gaines was live-streaming the standoff via Facebook before her account was shut down. Police say they killed Gaines after she pointed a shotgun at them. Police also say they shot her 5-year-old son, Kodi Gaines, who suffered an injury to his cheek but survived.