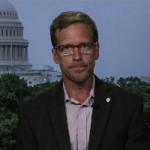 Is the Trump administration trying to silence government scientists from working or talking about climate change? According to news reports, as many as 50 senior Interior Department officials have been reassigned since Ryan Zinke became head of the department.

Meet the Senior Federal Official Blowing the Whistle on Trump’s Suppression of Climate Science
Is the Trump administration trying to silence government scientists from working or talking about climate change? According to news reports, as many as 50 senior Interior Department officials have been reassigned since Ryan Zinke became head of the department. Joel Clement is a senior official at the Interior Department. Up until recently, he focused on the dangers that climate change poses to Alaska Native communities in the Arctic. But, without explanation, Clement was recently transferred to an unrelated job within the Interior Department—he now collects royalty checks from oil and gas companies. Clement believes he was targeted for speaking out about climate change. He went public with his concerns in the pages of the Washington Post, where he wrote a piece titled “I’m a scientist. I’m blowing the whistle on the Trump administration.”

Formerly Jailed CIA Whistleblower John Kiriakou: Jeff Sessions Is Extending Obama’s War on Leaks
Attorney General Jeff Sessions has announced that the FBI has formed a new team focused on investigating potential leaks to the press. During a press conference on Friday, Sessions said that leak investigations have tripled since Donald Trump took office. Civil liberties groups criticized Sessions’s remarks. Ben Wizner of the ACLU said, “A crackdown on leaks is a crackdown on the free press and on democracy as a whole.”

Head of Bombed Minnesota Mosque Denounces Trump for Stoking Hate & Violence Against Somali Community
Governor Mark Dayton has condemned as terrorism Saturday’s attack on the Dar Al-Farooq Islamic Center in Bloomington, Minnesota. The explosive device was thrown through the mosque office’s window around 5 a.m. as people were gathering for morning prayers. No one was injured, but the bombing damaged the office. The FBI has taken over the investigation, but so far President Donald Trump has not commented on the attack despite having sent over 25 tweets since the blast. Islamophobic attacks against Muslims and mosques nationwide have been on the rise since Trump was elected.