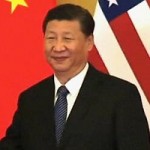 Democracy Now! goes to Beijing for an update on President Trump’s meeting with Chinese leader Xi Jinping as part of his five-nation trip to Asia. Trump used the talks to call on China to sever ties with North Korea, and address the U.S. trade deficit with the country he once accused of “raping” the United States.

In China, Trump Talks Trade & North Korea, Ignoring Climate Change & Crackdown on Human Rights
Democracy Now! goes to Beijing for an update on President Trump’s meeting with Chinese leader Xi Jinping as part of his five-nation trip to Asia. Trump used the talks to call on China to sever ties with North Korea, and address the U.S. trade deficit with the country he once accused of “raping” the United States. Human rights activists have urged him to use his trip to discuss climate change and challenge China over its crackdown on dissidents and call for the release of political prisoners.

Yemeni Journalist: Saudi Arabia’s Total Blockade on Yemen is “Death Sentence” for All
United Nations officials say Yemen will face the world’s largest famine in decades if the Saudi-led coalition refuses to lift its blockade on deliveries of aid. On Monday, the coalition shut air, land and sea routes into Yemen after Houthi rebels fired a missile that was intercepted near the Saudi capital, Riyadh. Saudi Arabia says its blockade is needed to stop Iran from sending weapons to the rebels. The U.N. says aid agencies were given no prior notice of the Saudi decision to shut down all land, air and seaports in Yemen. Meanwhile, medical experts warn the clampdown will worsen Yemen’s cholera epidemic, which has sickened more than 900,000 people. Afrah Nasser is an independent Yemeni journalist who is the founder and editor-in-chief of the Sana’a Review. Facing death threats, she is in exile from Yemen but continues to report on human rights violations, women’s issues and press freedom there. She is here in the U.S. to receive the International Free Press Award from the Committee to Protect Journalists.

Saudi Prince Mohammad bin Salman Consolidates Power & Purges Rivals Under “Anti-Corruption” Pretense
Saudi authorities arrested scores of prominent officials over the weekend, including 10 princes, four ministers and dozens of former ministers, in a massive shakeup by King Salman aimed at consolidating power for his son, Crown Prince Mohammad bin Salman, the main architect of the kingdom’s war in Yemen. Among those arrested was Prince Alwaleed bin Talal, one of the world’s richest people, with an estimated net worth of at least $17 billion. Talal has investments in many well-known U.S. companies, like Apple, Twitter, Citigroup—and Rupert Murdoch’s media empire, News Corp. The arrests, on unspecified “corruption” charges, came just hours after the crown prince convened a new anti-corruption committee with wide-ranging powers to detain and arrest anyone accused and to search their homes and seize their assets. Meanwhile, the White House said President Trump called King Salman to offer thanks for the kingdom’s purchases of billions of dollars in U.S. weaponry, while praising what it called the kingdom’s “modernization drive.”