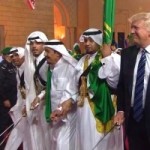 White House Defensive as Trump Shares British Hate Group Videos, Drawing International Condemnation
Donald Trump drew international outrage Wednesday after he retweeted three violent videos shared by a leader of the fringe, far-right-wing group Britain First. The videos purport to show violence carried out by Muslims. The videos were posted early Tuesday by Britain First deputy leader Jayda Fransen, who was arrested just days ago on hate speech charges over an appearance in Belfast last August. She was previously found guilty of religiously aggravated harassment after she verbally accosted a Muslim shopkeeper during a so-called “Christian patrol” last year in the English town of Luton. Mehdi Hasan is an award-winning British journalist and broadcaster at Al Jazeera English and columnist for The Intercept.

Mehdi Hasan Rips Thomas Friedman’s “Nauseating” Column in NYT Praising Saudi Arabia
Al Jazeera’s Mehdi Hasan responds to New York Times columnist Thomas Friedman’s recent controversial column, “Saudi Arabia’s Arab Spring, at Last.” Hasan argues the piece is absurdly sympathetic to Saudi Arabia, and that Trump’s friendly relations with the country mean he “is not just a liar and a conspiracy theorist, he’s a hypocrite. He goes on about radical Islamic terrorism but cozies up to Saudi Arabia, which many would argue has done more to promote ideologically and financially radical Islamic terrorism than any other country on earth.”

Will Trump’s Latest Islamophobic Tweets Impact Court Rulings on His Mostly-Muslim Travel Ban?
Oral arguments are scheduled for next week in both federal appeals court cases of President Trump’s proposed travel ban, which blocks various people from eight countries, six of them with Muslim majorities, from entering the United States. Mehdi Hasan discusses the impact Trump’s recent retweets of Islamophobic messages and videos could have on the cases and notes, “This is the way he’s always been.”

Nobel Prize-Winning Economist Joseph Stiglitz: Trump Tax Plan to Worsen Inequality, Expand Loopholes
Nobel Prize winning economist Joseph Stiglitz critiques the Republican tax plan that could face a vote as early as Friday. The sweeping legislation would overhaul the tax code in order to shower billions of dollars in tax cuts upon the richest Americans, including President Trump’s own family, and repeal the Affordable Care Act’s individual mandate. Stiglitz is a Columbia University professor, and chief economist for the Roosevelt Institute. He served as chairman of the Council of Economic Advisers under President Bill Clinton.