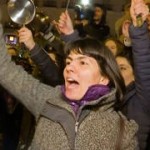 In Spain, women have launched the first nationwide women’s strike in Spain’s history to mark International Women’s Day. Their motto: “If we stop, the world stops.” Organizers say its supporters include Ada Colau, the mayor of Barcelona, and Manuela Carmena, the mayor of Madrid.

In Spain, Women Launch Nationwide Feminist Strike Protesting “Alliance of Patriarchy & Capitalism”
In Spain, women have launched the first nationwide women’s strike in Spain’s history to mark International Women’s Day. Their motto: “If we stop, the world stops.” Organizers say its supporters include Ada Colau, the mayor of Barcelona, and Manuela Carmena, the mayor of Madrid. Organizers published a manifesto reading, “Today we call for a society free of sexist oppression, exploitation and violence. We call for rebellion and a struggle against the alliance of the patriarchy and capitalism that wants us to be obedient, submissive and quiet. We do not accept worse working conditions, nor being paid less than men for the same work. That is why we are calling a work strike.”

On International Women’s Day, Women Declare: Emancipation Comes Through the Rejection of Capitalism
From Afghanistan to the Philippines to Mexico to Spain, women across the globe are taking to the streets today to mark International Women’s Day. In South Korea, International Women’s Day rallies were held in Seoul as the #MeToo movement sweeps the country. Filipino women rallied in Manila to protest the policies of Philippine President Rodrigo Duterte. Afghan women held a rare public rally in Kabul. In Kenya, African women are meeting today to discuss ending violence against women and girls with disabilities. In England, women organized a major march on Saturday to mark the 100th anniversary of women getting the vote. And in the United States, rallies are scheduled to take place across the country today.

Eve Ensler on International Women’s Day & Her New One-Woman Play “In the Body of the World”
Eve Ensler is the award-winning playwright and author of “The Vagina Monologues.” Ensler’s new play, “In the Body of the World,” is an exploration of the female body—how to talk about it, how to protect it, how to value it. She shares her deeply intimate and painful relationship with her own body and how it has changed throughout her life, from being raped to struggling with anorexia, from battling uterine cancer to reclaiming her body when dancing with women from the Democratic Republic of Congo in the City of Joy, a revolutionary community for women survivors of gender violence in Bukavu, which she helped establish.