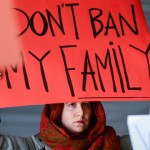 On Wednesday, only hours before the Trump administration’s new travel ban was set to go into effect, a federal judge in Hawaii issued a nationwide halt to the executive order, which would have temporarily suspended refugees and people from six majority-Muslim nations from entering the United States. This morning, a federal judge in Maryland also blocked part of the travel ban.

In Stinging Blow to President, Hawaii & Maryland Judges Block Trump’s Second Muslim Ban
On Wednesday, only hours before the Trump administration’s new travel ban was set to go into effect, a federal judge in Hawaii issued a nationwide halt to the executive order, which would have temporarily suspended refugees and people from six majority-Muslim nations from entering the United States. This morning, a federal judge in Maryland also blocked part of the travel ban, dealing a second legal blow to the Trump’s executive order. Lee Gelernt, an ACLU attorney, presented the first challenge to the executive order on immigration. His argument resulted in a nationwide injunction.

Rep. Gutiérrez Speaks Out After Being Handcuffed for Demanding Answers on ICE Raids & Deportations
In Chicago, federal police handcuffed Democratic Congressmember Luis Gutiérrez along with activists and lawyers Monday, after they held a sit-in protest at a federal immigration office. Gutiérrez says the group refused to leave the Chicago office of Immigration and Customs Enforcement, or ICE, after the agency’s regional director refused to answer his questions about the Trump administration’s plans for immigration sweeps and mass deportation. For more, Congressmember Gutiérrez joins the show. He is co-chair of the Immigration Task Force of the Congressional Hispanic Caucus.

Complete Idiocy: Rep. Gutiérrez Slams Rep. King’s Racist Tweet About “Somebody Else’s Babies”
Iowa Republican Congressmember Steve King sparked outrage Sunday after publishing a racist tweet in support of far-right Dutch politician Geert Wilders, who was rejected by the majority of Dutch voters during Wednesday’s parliamentary elections. Congressmember King was retweeting a cartoon by the anti-immigrant group Voice of Europe depicting Wilders with a finger plugging a leak in a dike, labeled “Western Civilization,” holding back a toxic wave of Islam. The cartoon also depicts Muslim men with a sword and a suicide bomb vest. Rep. King’s retweet of the cartoon read, “Wilders understands that culture and demographics are our destiny. We can’t restore our civilization with somebody else’s babies.”

ACLU Lawyer Esha Bhandari on Your Rights If Border Agents Try to Seize Your Cell Phone at the Border
Border agents are increasingly seizing cellphones and demanding passwords of travelers, including U.S. citizens. The number of searches skyrocketed under President Obama, reaching 25,000 last year. But the number is expected to be far higher this year. According to NBC News, more than 5,000 devices were searched in February alone—that’s more than the entire number searched in all of 2015. Guest is Esha Bhandari, staff attorney with the ACLU Speech, Privacy, and Technology Project. Her recent article is headlined “Can Border Agents Search Your Electronic Devices? It’s Complicated.”

In Historic Report, U.N. Agency Says Israel Is Imposing an “Apartheid Regime” on Palestinian People
For the first time, a United Nations agency has directly accused Israel of imposing an “apartheid regime” on the Palestinian people. The report also urges governments to “support boycott, divestment and sanctions [BDS] activities and respond positively to calls for such initiatives.” The findings come in a new report published by the U.N. Economic and Social Commission for Western Asia, which is composed of 18 Arab states.