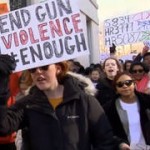 More than a million students from over 3,000 schools walked out of classes to protest gun violence on Wednesday. Walkouts occurred in all 50 states and overseas, one month after 17 students and staff were shot dead at Marjory Stoneman Douglas High School.

Enough! A Million Students Walk Out of Schools to Demand Action on Guns in Historic Day of Action
In a historic day of action, more than a million students from over 3,000 schools walked out of classes to protest gun violence on Wednesday. Walkouts occurred in all 50 states as well as some schools overseas. The nationwide student walkouts occurred one month after 17 students and staff were shot dead at Marjory Stoneman Douglas High School in Parkland, Florida. At many schools, students walked out for 17 minutes—one minute for each person murdered in Parkland. The students at Marjory Stoneman Douglas High School are now organizing a massive March for Our Lives on March 24 in Washington, and solidarity marches are planned across the country.

Remembering Courtlin Arrington: The Victim of a Recent School Shooting Largely Ignored by Media
Wednesday’s nationwide student walkout occurred one month after 17 students and staff were shot dead at Marjory Stoneman Douglas High School in Parkland, Florida. Many students left classes for 17 minutes—one minute for each person murdered in Parkland. But in Alabama some students walked out for 18 minutes to remember another student who was recently killed by gun violence at school: Courtlin Arrington, a 17-year-old African-American student who was shot dead last week at Huffman High School in Birmingham, Alabama, by a fellow student. She was a high school senior who was planning to attend college next year. She had dreams of becoming a nurse. While the Parkland shooting has dominated national headlines for a month, far less coverage was paid to the death of Courtlin Arrington.

Farmworkers Bring Human Rights Fight to Wendy’s Doorstep, Fasting & Calling for Boycott over Abuses
Dozens of farmworkers with the Coalition of Immokalee Workers have entered their last day of a 5-day fast outside the Manhattan office of Nelson Peltz, the board chair and largest shareholder of the restaurant chain Wendy’s. They are demanding Wendy’s sign onto the Fair Food Program, which would require the fast-food giant to purchase tomatoes from growers that follow a worker-designed code of conduct that includes a zero-tolerance policy for sexual harassment and abuse in the fields. Wendy’s is the only major fast-food chain that has refused to sign onto the Fair Food Program. Wendy’s competitors McDonald’s, Burger King, Subway, Chipotle and Taco Bell all have joined the Fair Food Program, which CIW members say has virtually ended sexual harassment and assault for tens of thousands of workers on participating farms in seven states. The fast today will end in a “Time’s Up Wendy’s” march in New York.

Rebecca Solnit on #MeToo, Mass Movements and the 10th Anniversary of “Men Explain Things to Me”
This month marks the 10th anniversary of Rebecca Solnit’s groundbreaking essay, “Men Explain Things to Me.” In 2008, Solnit wrote, “Men explain things to me, and other women, whether or not they know what they’re talking about… Every woman knows what I’m talking about. It’s the presumption that makes it hard, at times, for any woman in any field; that keeps women from speaking up and from being heard when they dare; that crushes young women into silence by indicating, the way harassment on the street does, that this is not their world. It trains us in self-doubt and self-limitation just as it exercises men’s unsupported overconfidence.” The essay has also been credited with launching the term “mansplaining,” though Rebecca Solnit did not coin the phrase.

One thought on “Enough! A Million Students Walk Out of Schools to Demand Action on Guns in Historic Day of Action”