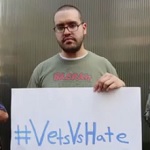 Today Vets Vs Hate protests the Drumpf, another African American victim of police shooting is denied justice, a Black Lives Matter activist is charged with “felony lynching” (yes, you read that correctly) and the independence movement in Western Sahara mourns Mohamed Abdelaziz, who died Tuesday at 68. 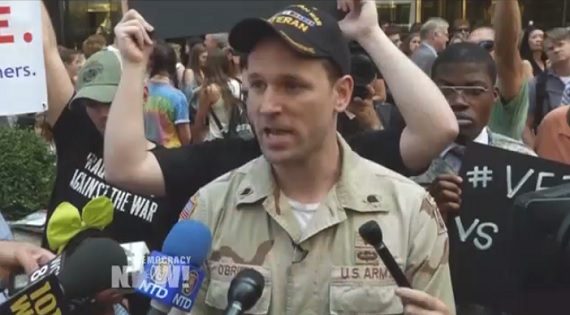 Perry O’Brien, who served as a medic in Afghanistan, speaks out against the Drumpf hate machine. Image: video still

Presumptive Republican presidential nominee Donald Trump is facing scrutiny this week after questions emerged over what happened to millions of dollars he allegedly raised for veterans at a fundraiser in January. Trump held the fundraiser on January 28 after he refused to take part in a debate organized by Fox News. At the time, Trump claimed he had raised over $6 million, but a recent Washington Post investigation revealed that only about half of the money was actually paid out to veterans groups. Soon after the Post article was published, Trump began cutting more checks. More than a dozen veterans’ groups reported receiving money from Trump over the past week. On Tuesday, Trump held a press conference to defend his actions, and lambasted the press. Outside the press conference, members of the group Vets Vs. Hate protested.

Perry O’Brien, who served as a medic in Afghanistan, criticized Trump’s rhetoric:

I’m here because when I served in Afghanistan, I served with women, I served with Muslims, and I served with Latinos—all groups that Donald Trump has maligned and even threatened. All of those folks actually donned the uniform, they actually served their country. As far as we can see, as veterans and in the military community, Donald Trump only seems interested in serving himself.

Also, federal prosecutors in Minnesota announced Wednesday that no charges will be filed against the two police officers involved in the shooting death last fall of Jamar Clark, an unarmed 24-year-old African American. Clark was shot in the head after a scuffle with officers who responded to a report of an assault. However, multiple witnesses say Clark was shot while handcuffed. Clark’s death sparked a series of protests in Minneapolis, including a weeks-long occupation outside the 4th Police Precinct and a protest during which white supremacists opened fire on a group of Black Lives Matter activists. Lena K. Gardner, co-founder and organizer of the Minneapolis chapter of Black Lives Matter, spoke to Amy Goodman. “There’s a very specific interpretation of events that happened in order to protect the officers. I believe that the system is set up to protect officers, to ensure that their version of events is given more credibility.”

In an ironic move, Black Lives Matter organizer Jasmine Richards in Pasadena is facing four years in state prison after she was convicted of a rarely used statute in California law originally known as “felony lynching.” Under California’s penal code, “felony lynching” was defined as attempting to take a person out of police custody. Jasmine was arrested and charged with felony lynching last September, after police accused her of trying to de-arrest someone during a peace march at La Pintoresca Park in Pasadena on August 29, 2015. The arrest and jailing of a young black female activist on charges of felony lynching sparked a firestorm of controversy.

Finally, a leader of the independence movement in Western Sahara died Tuesday. Mohamed Abdelaziz was the leader and co-founder of the Sahrawi people’s Polisario Front movement, which has demanded independence ever since Morocco took over most of Western Sahara in 1975. He was 68. A 16-year-long insurgency led by the indigenous Polisario Front ended with a U.N.-brokered truce in 1991. The resolution promised a referendum on independence, which has yet to take place. Morocco is only willing to grant limited autonomy to the disputed region. Eighty-four countries as well as the African Union recognize Western Sahara as an independent nation. In March, Morocco expelled U.N. staffers from Western Sahara after Secretary-General Ban Ki-moon referred to Morocco’s rule over the region as “occupation” during a visit to refugee camps in the Algerian town of Tindouf, located in southwestern Algeria. The expulsion of the 84 U.N. staffers has put at risk the ceasefire between Morocco and the Polisario Front.