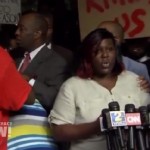 According to the Washington Post, 505 people been killed by police across the United States so far this year. African Americans — especially young Black men — are disproportionately the target of police violence. There have now been two more fatal police shootings in Baton Rouge, Louisiana, and in Falcon Heights, Minnesota. 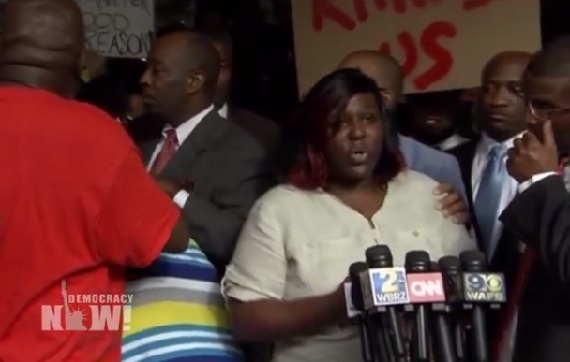 Quinyetta McMillan, the mother of Alton Sterling’s 15-year-old boy Cameron, who broke down and was held and supported by the people at the news conference. How many more needless deaths will it take for lawmakers and the public to treat this issue with the gravity it deserves? Image: video still

In St. Paul, Minnesota, hundreds of protesters gathered outside the governor’s mansion to protest the fatal police shooting of African American man Philando Castile during a traffic stop for a broken tail light. Castile, his girlfriend Lavish Reynolds and her young daughter were stopped by police on Wednesday. Reynolds broadcast the aftermath of the fatal police shooting live on Facebook in an extraordinary video, in which she narrates the events while still inside the car next to her dying boyfriend as the police officer continues to point the gun at her and her daughter. Nekima Levy-Pounds, the president of the Minneapolis chapter of the NAACP, said: “It is not uncommon to treat black victims and witnesses as criminals in these types of cases.”

Hundreds gathered for a vigil last night in Baton Rouge, Louisiana, to honor father of five Alton Sterling, who was fatally shot by police early Tuesday morning. Sterling was a 37-year-old African-American. The two officers involved are both white. Bystander video shows Sterling was pinned to the ground when he was fatally shot. The Justice Department has announced it will investigate the killing. Sterling’s death has sparked two days of protests in Baton Rouge, as well as protests last night in Ferguson, Missouri, and Philadelphia, where activists were arrested for blocking Interstate 676.