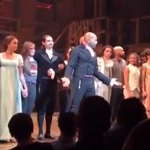 Amy Goodman and co. spend the hour looking at the incoming administration of Donald Trump, a candidate who ran on a platform of open bigotry. However, Mike Pence has his own troubling platform. His ascendance to the vice-presidency is described by Jeremy Scahill as a “tremendous coup” for the religious right.

Amy Goodman and co. spend the hour looking at the incoming administration of President-elect Donald Trump, a candidate who ran on a platform of open bigotry, threats against immigrants and Muslims, and blatant misogyny. Trump’s vice president, Mike Pence, is often portrayed as a counterbalance to Trump and called a “bridge to the establishment.” But our guest Jeremy Scahill, co-founder of The Intercept, says Pence’s ascendance to the second most powerful position in the U.S. government is a “tremendous coup for the radical religious right. Pence—and his fellow Christian supremacist militants—would not have been able to win the White House on their own. For them, Donald Trump was a godsend.”