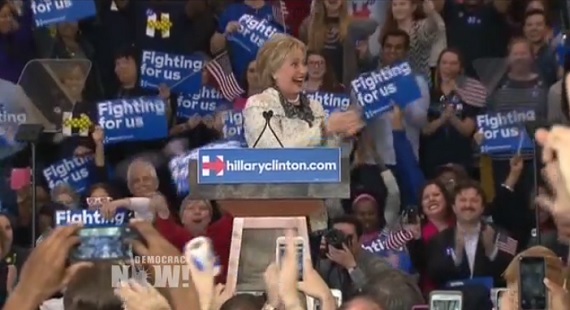 As voters went to the polls Saturday for South Carolina’s Democratic primary, presidential candidate Hillary Clinton crushed rival Bernie Sanders, winning the primary with 73.5 percent of the vote and picking up 39 additional delegates, compared to 14 delegates for Sanders. African Americans in the state favored Clinton over Sanders by more than six to one, while white voters narrowly preferred her, as well. Clinton’s decisive win propels her into this week’s critical Super Tuesday voting, where a dozen states go to the polls and about 880 delegates are at stake.

Examining the turnout for Clinton, South Carolina civil rights activist and community organizer Kevin Alexander Gray is critical of how Sanders campaigned in the state’s black community. “If you’re going to come down here and you’re going to run a Northern liberal kind of campaign, if you come down here and you talk about revolution and movement but your campaign doesn’t look like the movement you claim to represent, I think people go with the devil you know,” Gray says.

Meanwhile, Donald Trump failed to condemn endorsements from former KKK leader David Duke, who said voting against Trump would be “treason to your heritage.”