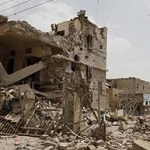 Up to 100,000 people gathered in the Yemeni capital of Sana’a Saturday to protest the ongoing Saudi strikes and in support of Houthi rebels. Over the past two weeks, the U.S.-backed Saudi coalition has bombed a Doctors Without Borders hospital, killing 19 people, and bombed two schools in northern Yemen, killing at least 14 children. 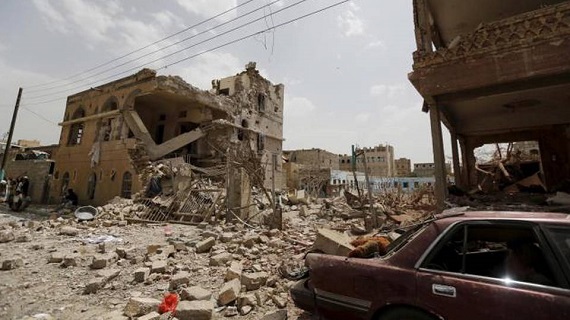 After a year and a half of bombing by Saudi-led forces, residents of Yemen face the threat of starvation. Photo from Democracy Now! website.

Secretary of State John Kerry is heading to Saudi Arabia as the Obama administration is facing increasing pressure for its support of the Saudi-led war in Yemen. This comes as up to 100,000 people gathered in the Yemeni capital of Sana’a Saturday to protest the ongoing Saudi strikes and in support of Houthi rebels. Over the past two weeks, the U.S.-backed Saudi coalition has bombed a Doctors Without Borders hospital, killing 19 people, and bombed two schools in northern Yemen, killing at least 14 children. Doctors Without Borders has since announced it will withdraw staff from six hospitals in the north of the country. For more, Amy Goodman spoke to Kristine Beckerle, a fellow at Human Rights Watch. She has just returned from Yemen.

Even before the Saudi-led bombing campaign in Yemen began more than a year ago, Yemen was ranked as one of the poorest countries in the world. But now, a year and a half into the war, Yemen’s health system has broken down, and the population is facing the threat of starvation. Amy Goodman was joined by Andrew Cockburn, the Washington editor for Harper’s magazine. His latest piece for Harper’s is headlined “Acceptable Losses: Aiding and Abetting the Saudi Slaughter in Yemen.” He is author of “Kill Chain: The Rise of the High-Tech Assassins.”

Also today: In 2012, 19-year-old Tevin Louis and his best friend Marquise Sampson allegedly robbed a restaurant. After reportedly making off with about $1,200, the two ran in different directions. Sampson crossed paths with an officer, who gave chase and ultimately opened fire, killing the teenager. Louis arrived at the scene where his friend was shot, and attempted to cross the police line. He was arrested for disorderly conduct. But in a shocking turn, Louis was eventually charged with first-degree murder in the death of his best friend, even though it was the officer who killed Sampson.

Louis was found guilty. He is now serving a 32-year sentence for armed robbery and a 20-year sentence for murder. Louis is one of 10 people with similar cases exposed in the Chicago Reader’s new article headlined “Charged with Murder, But They Didn’t Kill Anyone—Police Did.” The article’s authors joined today’s show: Alison Flowers, a journalist with the Chicago-based Invisible Institute, and Sarah Macaraeg, an independent journalist and fellow with the International Center for Journalists.