In last night’s Republican debate, Donald Trump defended his comment that “Islam hates us.” There was also discussion of his rallies, which are being soured with violence. 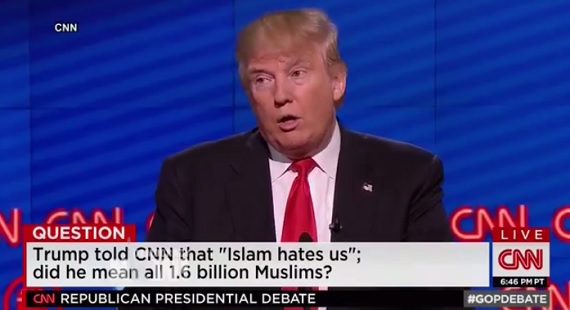 “Most of them,” apparently. Donald Trump continues to posit himself as a racist’s dream candidate. Image: video still

In last night’s Republican debate, Donald Trump defended his comment that “Islam hates us.” There was also discussion of his rallies, which are being soured with violence, including an assault on an African-American protester at the North Carolina event.

Amy Goodman interviews Linda Sarsour, co-founder of the Muslim Democratic Club of New York, and Mohamed Elibiary, who has been involved with the Republicans for over 20 years. Elibiary had this to say about Trump supporters:

“The more you move towards the edges of the political spectrum, the more that you’re going to end up finding the people are more emotionally charged, and they’re not really thinking rationally, they’re not civil, they’re not looking to compromise, they’re extremely frustrated—all of those attributes.”

Today’s show also features a discussion on the GOP candidates’ policy on Israel, and all the Presidential hopefuls’ policies on Latin America. Murdered environmental activist Berta Cáceres singled out Hillary Clinton two years ago for supporting the Honduran coup:

“This demonstrates the meddling of North Americans in our country. The return of the president, Mel Zelaya, became a secondary issue. There were going to be elections in Honduras. And here she [Clinton] recognized that they didn’t permit Mel Zelaya’s return to the presidency.”