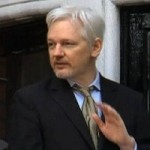 As U.S. Preps Arrest Warrant for Assange, Glenn Greenwald Says Prosecuting WikiLeaks Threatens Press Freedom for All
Pulitzer Prize-winning journalist Glenn Greenwald responds to reports that the Trump administration has prepared an arrest warrant for WikiLeaks founder Julian Assange. Attorney General Jeff Sessions confirmed the report at a news conference Thursday. Last week, CIA chief Mike Pompeo blasted WikiLeaks as a “hostile intelligence service,” in a stark reversal from his previous praise for the group. Pompeo made the remarks last week at the Center for Strategic and International Studies in his first public address as CIA director. Pompeo went on to accuse WikiLeaks of instructing Army whistleblower Chelsea Manning to steal information. He also likened Julian Assange to a “demon” and suggested Assange is not protected under the First Amendment. It’s been nearly five years since Julian Assange entered the Ecuadorean Embassy in London seeking political asylum, fearing a Swedish arrest warrant could lead to his extradition to the United States. Greenwald’s story for The Intercept is “Trump’s CIA Director Pompeo, Targeting WikiLeaks, Explicitly Threatens Speech and Press Freedoms.”

Shocking Exposé Reveals Trump Associates & ISIS-Linked Vigilantes Are Attempting Coup in Indonesia
As Vice President Mike Pence railed against ISIS-linked terrorism Thursday, longtime investigative journalist Allan Nairn speaks about his shocking new exposé that reveals backers of Donald Trump in Indonesia have joined army officers and a vigilante street movement linked to ISIS in an attempt to oust Indonesia’s president. Writing in The Intercept, Nairn reveals that Indonesians involved in the coup attempt include a corporate lawyer working for the mining company Freeport-McMoRan, which is controlled by Trump adviser Carl Icahn. Video has even emerged showing the lawyer at a ceremony where men are swearing allegiance to ISIS. According to Nairn, two of the other most prominent supporters of the coup are close associates of Donald Trump—Fadli Zon, vice speaker of the Indonesian House of Representatives, and Hary Tanoe, Trump’s primary Indonesian business partner, who is building two Trump resorts, one in Bali and one outside Jakarta. Nairn’s article is making waves in Indonesia.