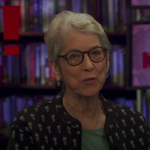 Ahead of today’s hearing before the Senate Judiciary Committee, President Trump lashes out at the women who have accused him and his Supreme Court nominee Brett Kavanaugh of sexual assault, saying Democrats are running a “con game.” Jessica Leeds responds.

“Con Game”? Trump Accuser Jessica Leeds Responds to His Dismissal of Sexual Assault Allegations
Ahead of today’s hearing before the Senate Judiciary Committee, President Trump lashes out at the women who have accused him and his Supreme Court nominee Brett Kavanaugh of sexual assault, saying Democrats are running a “con game.” Jessica Leeds, whom Trump referenced in comments Wednesday, responds. She is one of 16 Trump accusers, who says he groped her in the first-class cabin of a commercial flight in 1979.

Bill Cosby Survivor Lili Bernard: Women Who Report Sexual Assault Are Often “Re-Raped” in Court
Bill Cosby rape survivor Lili Bernard responds to President Trump’s dismissal of sexual assault allegations against himself and his Supreme Court nominee Brett Kavanaugh ahead of today’s hearing in which his accuser, Dr. Christine Ford, is set to testify. “Never in my life would I have imagined that the same week in which my serial rapist … is entered into a state penitentiary for years, that the nominated Supreme Court justice would be in a hearing where he has to face questions about sexual assault,” Bernard says. She is a visual artist and actor who has accused Bill Cosby of drugging and raping her in the early 1990s when he mentored her in preparation for her guest-starring role on “The Cosby Show.”

Yale Law Students Protest Alum Brett Kavanaugh, Demand Investigation of Sexual Assault Allegations
Thousands of Yale students are protesting Supreme Court nominee Brett Kavanaugh in support of Deborah Ramirez, the Yale alumna who alleges that Kavanaugh exposed himself to her by thrusting his genitals in her face at a drunken dorm party when they were both freshmen. Kavanaugh is a graduate of both Yale University and the Yale Law School. More than 2,800 Yale women have signed a letter of support for Ramirez. On Monday, Yale Law School faculty canceled 31 classes to allow more than 260 of their students to join a protest in support of Ramirez. Yale Law School student Samantha Peltz, who helped organize the protests against Brett Kavanaugh, says that Yale students will “continue speaking out, speaking to the press, until we feel there is a full and fair investigation.”

Trump Threatens Venezuela with New Sanctions Even as It Faces Economic & Humanitarian Crisis
President Nicolás Maduro addressed the United Nations General Assembly on Wednesday in a surprise visit, just one day after Donald Trump accused him of corruption and announced new sanctions against his wife Cilia Flores and other members of his inner circle. “Despite all of the differences, … I am willing to reach out my hand to the president of the United States and sit down to talk about the issues of bilateral differences and the issues of our region,” Maduro said. Trump said Wednesday that he would be willing to meet with Maduro and that all options are on the table to help end the political, economic and humanitarian chaos in Venezuela. Vijay Prashad is the director of the Tricontinental: Institute for Social Research and chief editor of LeftWord Books. He’s also the chief correspondent of Globetrotter.