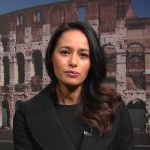 Rula Jebreal: My “Secret Interview” with Jamal Khashoggi Before His Brutal Murder by the Saudis
Turkish President Recep Tayyip Erdogan has directly accused Saudi Arabia of the premeditated murder of Saudi journalist Jamal Khashoggi, who was last seen alive entering the Saudi Consulate in Istanbul in Turkey on October 2. Erdogan said a team of Saudi officials had planned Khashoggi’s murder days in advance, directly contradicting Saudi Arabia’s claim that Khashoggi died after a fight in the consulate. Turkish officials have claimed that audio and video recordings show Saudi officials used a bone saw to dismember Khashoggi’s body, but Erdogan made no mention of the audio and video recordings of the killing. Fallout from Khashoggi’s murder is being felt across the globe. Rula Jebreal is a journalist, author and foreign policy analyst who conducted one of the last known interviews with Khashoggi. She says calling Saudi Crown Prince Mohammed bin Salman a reformer is “like calling David Duke a civil rights activist.” Her new cover story for Newsweek is titled “Jamal Khashoggi Secret Interview: The Saudi Journalist’s Views of Islam, America and the ‘Reformist’ Prince Implicated in His Murder.”

The U.S. Helped Destabilize Honduras. Now Honduran Migrants Are Fleeing Political & Economic Crisis
President Donald Trump is lashing out at the Central American migrant caravan of some 7,000 people making their way through Mexico and toward the U.S. border. On Monday, he claimed without evidence that terrorists and members of the MS-13 gang had infiltrated the group. Trump has doubled down on his threat to cut aid to Honduras, El Salvador and Guatemala, and called out Democrats over U.S. border policy, in an ongoing attempt to turn the caravan into a main issue in upcoming midterm elections. Two Central American-born activists are interviewed, Patricia Montes of Centro Presente and Oscar Chacón of Alianza Americas.