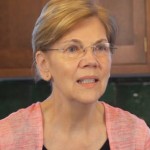 Sen. Warren’s Claim to Native Heritage Didn’t Aid Her Career, But Did It Keep Women of Color Out?
Senator Elizabeth Warren has come under fire since releasing a DNA test Monday showing Native American ancestry. The announcement responded directly to President Trump, who has frequently attacked Senator Warren by calling her “Pocahontas.” A Stanford professor of genetics says there is “strong evidence” of Native American lineage in Warren’s family tree dating back six to 10 generations. At multiple points in her career, Warren identified as Native American, but she says she did not use the claim to advance her career. nnie Linskey in Washington, D.C. is deputy bureau chief for The Boston Globe. She examined hundreds of documents to determine that ethnicity was “not a factor” in Warren’s rise in academia and law.

Native Americans React to Elizabeth Warren’s DNA Test: Stop Making Native People “Political Fodder”
Native Americans across the country are criticizing Senator Elizabeth Warren’s decision to use a DNA test to assert her Native American heritage. Chuck Hoskin Jr., secretary of state of the Cherokee Nation, said, “Sovereign tribal nations set their own legal requirements for citizenship, and while DNA tests can be used to determine lineage, such as paternity to an individual, it is not evidence for tribal affiliation. Using a DNA test to lay claim to any connection to the Cherokee Nation or any tribal nation, even vaguely, is inappropriate and wrong.” This story is covered in a roundtable discussion of Native American activists and journalists to respond to Warren’s DNA test and the subsequent media coverage. In Fargo, North Dakota, Tara Houska is national campaign director for Honor the Earth and an Ojibwe lawyer. In Anchorage, Alaska, Mark Trahant is the editor of Indian Country Today. He’s a member of the Shoshone-Bannock Tribes. In Seattle, Washington, Gyasi Ross is a member of the Blackfeet Nation and host of the podcast Breakdances with Wolves.

As 2018 Midterms Approach, Native American Women Are Running for Office in Record Numbers
A record number of Native American women are running for office in the midterm elections. At least four candidates are vying to become the first Native American women elected to Congress, including Deb Haaland in New Mexico and Sharice Davids in Kansas. Three Native women are running for governor, and 31 are running for seats in state legislatures. In Fargo, North Dakota, Tara Houska is the national campaign director for Honor the Earth and an Ojibwe lawyer. In Anchorage, Alaska, Mark Trahant is editor of Indian Country Today. He’s a member of the Shoshone-Bannock Tribes. In Seattle, Washington, Gyasi Ross is a member of the Blackfeet Nation and host of the podcast Breakdances with Wolves.