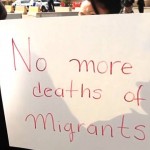 For the second time this month, a Guatemalan child has died in the custody of U.S. Customs and Border Protection. Eight-year-old Felix Gomez Alonzo died in New Mexico on Christmas Eve, after being detained since December 18.

8-Year-Old Guatemalan Boy Dies in Border Patrol Custody Days After High Court Rejects Asylum Ban
For the second time this month, a Guatemalan child has died in the custody of U.S. Customs and Border Protection. Eight-year-old Felix Gomez Alonzo died in New Mexico on Christmas Eve, after being detained since December 18. This follows the death of a 7-year-old indigenous Guatemalan girl, Jakelin Caal Maquín, who died on December 8, two days after she and her father presented themselves at the border in a bid for asylum. Meanwhile, the Supreme Court has rejected President Trump’s asylum ban, which attempted to deny asylum to anyone entering the country from outside of a legal port of entry. Supreme Court Chief Justice John Roberts joined the liberal wing of the court in the 5-4 vote. Baher Azmy is a legal director of the Center for Constitutional Rights, which helped file the lawsuit.

Richard Wolff: We Need a More Humane Economic System—Not One That Only Benefits the Rich
The partial shutdown of the U.S. federal government is entering its fifth day after a political impasse over President Donald Trump’s contentious demand for border wall funding. Funding for about a quarter of all federal programs expired at midnight on Friday, including the departments of Justice, Agriculture and Homeland Security. On Christmas Day, Trump said the shutdown will last until Democrats agree to fund his $5 billion U.S.-Mexico border wall, despite previously repeatedly claiming Mexico would pay for the wall. The shutdown is occurring as concern grows over the U.S. economy. U.S. stock markets are on pace to suffer their worst December since 1931 during the Great Depression. In response, Treasury Secretary Steven Mnuchin held an emergency meeting with top financial regulators and also convened a separate call with top executives of six major banks. Economist and professor Richard Wolff is interviewed.

Muslim Ban: Meet the Yemeni Americans Suing Trump in an Attempt to Reunite with Loved Ones
A group of Yemeni Americans have filed a new federal lawsuit over President Trump’s Muslim ban. The suit alleges the State Department has revoked previously approved visas, preventing many Yemenis from reuniting with their families living in the United States. Democracy Now! speaks to two of the plaintiffs and the Center for Constitutional Rights, which brought the lawsuit.