How do you go about communicating desires that have been activated during times of change? How do you admit them to yourself, much less to a lover or your employer, or to your friends and family? With Mercury entering Pisces as Mars continues through the Uranus-Pluto square, these are the questions to ask yourself the weekend.

How do you go about communicating desires that have been activated during times of change? How do you admit them to yourself, much less to a lover or your employer, or to your friends and family? 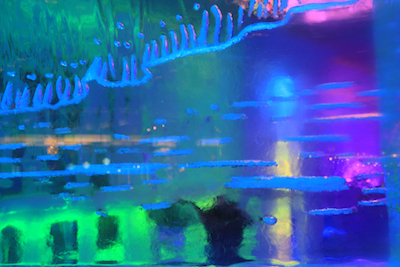 Sometimes you have to let yourself melt into what you want and let yourself soften to be able to express the ideas. Photo of lights through an ice bar in Manhattan by Amanda Painter.

One of my Planet Waves colleagues suggested this idea to me when I was feeling stuck staring at this week’s astrology charts; sometimes when there’s major astrological events clustered together, it can be hard to zero in on one clear theme.

The part about “in times of change” comes from the fact that we’re in the last of seven exact square contacts between Uranus in Aries and Pluto in Capricorn. That’s the aspect that seems to have turned the world on its head these last few years. It is exact for the last time Monday at 10:54 pm EDT (2:54 UTC Tuesday).

“Desires” is suggested by Mars in Aries, which entered into a conjunction to Uranus and a square to Pluto on Wednesday. We’re still in the hot zone for that. And among the things Mars represents is active desire or libido — along with physical action and aggression. Those last couple key words are the reason you should still stay focused in any potentially risky activities this weekend (that goes for anything from spring skiing to driving to rewiring a light socket).

Getting back to those desires, though: sometimes they build gradually, tugging at the corners of your consciousness until they reach critical mass and cannot be denied. Other times, the fuse gets lit out of the blue and your choice is to ride the rocket or risk burning your hand if you try to hold on instead of letting go into it.

The last three years of Uranus-Pluto have shown us many sudden changes, but the “big stuff” — what really lasts and marks this era in history — has been developing slowly, and will continue to for a few more years. Now Mars is getting into the act, sending Uranus-Pluto off with a big hot kiss and making things personal.

Uranus is an activating force (as is Mars); Pluto is also, in its own way. Though while Uranus is more likely to introduce something new, Pluto is all about clearing the ground to make room for that thing. Both parts of that process can be scary, as you admit to yourself what new thing you’d like to pursue — and what old thing you might need to let fall away as you do.

Then comes that part about “communicating desires.” Mercury, the planet of the mind and communication (as well as our electronic media by which we communicate), is finally leaving Aquarius after more than two months. That’s a long time for a typically speedy planet in a sign where its hallmarks include a sense of intellectual detachment and seemingly clear, solid ideas.

Mercury ingresses Pisces tonight (March 12) at 11:52 pm EDT (3:52 UTC Friday). Whereas before your mind was crystalline, you might now feel a little…mushy. Or rather, as though your thoughts are being filtered through an unusually saturated sponge of emotions. You’ve been through this before — Mercury spends some time in Pisces every year.

Mercury in Pisces is very sensitive, psychic, poetic and visionary; it’s your instinctual mind more than your reasoning mind; it’s feeling your thoughts. So rather than going for the full-steam-ahead list of bullet-point demands when you try to express what you want and need this weekend, maybe try something softer and gentler. Think poetry and music; think showing by example rather than dictating.

Think with your heart and soul — and don’t be afraid to go deep; Mercury conjoins the centaur planet Nessus as soon as it enters Pisces. Whatever Uranus and Pluto have been churning up, whatever Mars is activating for you, Mercury conjunct Nessus indicates that expressing it begins and ends with you.

12 thoughts on “Communicating Desires Activated By Times of Change”