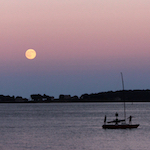 On July 9 (July 8 in some time zones) there will be a Full Moon in Capricorn, conjunct Pluto. Amanda Painter considers this image of deep emotional transformation, which is opposite the Cancer Sun, in the context of an article on today’s ‘call-out culture’ — and how ‘calling in’ might be more constructive.

As I was preparing to write about this Sunday’s powerful Capricorn Full Moon conjunct Pluto, I happened to read a 2015 article by Asam Ahmad titled, “What Makes Call-Out Culture So Toxic.” I realized the article speaks to one possible level of experiencing this Full Moon, or one of its messages. 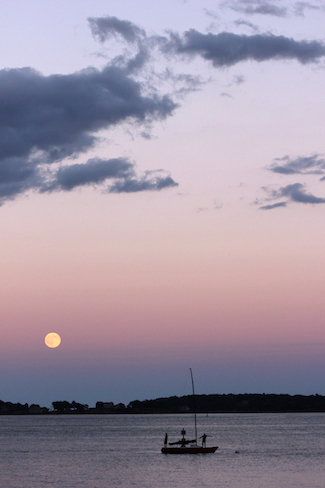 The astrological setup is that the Sun in Cancer will oppose the Moon in Capricorn, exact just before 12:07 am EDT on July 9 (04:06:30 UTC). The Moon will be precisely one degree away from a conjunction to Pluto.

The Sun and Moon are both making their way to square Uranus and Eris in Aries, though the Moon will make its square later the same day.

Uranus and Eris in Aries are emblematic of much of the social and political chaos we’re currently living in — particularly as it is experienced via (and is shaped by) digital media.

In this Full Moon chart, Uranus-Eris represents not only our cultural environment, but the way that environment is provoking us — both consciously and unconsciously — and creating a sense of tension you may need to act on.

With the Moon-Pluto conjunction, we get an image of deep emotional transformation, particularly with regard to what has seemed previously set in stone. It also speaks of a sense of loneliness that can be inherent in such a personal, internal process.

The Cancer Sun in opposition sets up an interesting dynamic: emotional sensitivity, but of the kind that could potentially get overly concerned with what’s going on within others, or get a little defensive in reaction to what’s being mirrored. It speaks of the urge to seek safety by identifying with one’s ‘tribe’ or family in reaction to some interpersonal confrontation — such as being faced with changes that are beyond one’s control; or even the attempt to control those changes and others’ emotions anyway.

Which brings me to Ahmad’s insightful essay. One of the points he makes regards the way that the performance of calling people out publicly for their wrongs often feels more important than the content of the call-out. That is, it’s more about displaying one’s own correctness than it is about making empathetic contact with a person, to help them to see how they can be more considerate and more humane rather than perpetuating some sort of systemic oppression (however unconsciously). Ahmad describes the alternative of ‘calling in': speaking privately with a person to address certain behaviors without resorting to public shaming.

I would say that ‘calling in’ speaks to both the nurturing quality of a Cancer Sun and its orientation on ‘family': rather than casting someone out of the tribe, you gently draw them in by caring enough to make sure they feel safe enough to learn a kinder way. ‘Calling in’ is much more likely to subvert the defensiveness that can get in the way of a person’s ability to gain perspective on their actions and see the value in changing their attitude, language or behavior.

“But when people are reduced to their identities of privilege (as white, cisgender, male, etc.) and mocked as such, it means we’re treating each other as if our individual social locations stand in for the total systems those parts of our identities represent. Individuals become synonymous with systems of oppression, and this can turn systemic analysis into moral judgment. Too often, when it comes to being called out, narrow definitions of a person’s identity count for everything.”

I think there’s something in that statement that relates to the presence of the Moon and Pluto in Capricorn for this Full Moon. Capricorn is the sign of established institutions (among other things). And while Pluto symbolizes the bulldozer that’s been digging up the foundations of those institutions the last nine years, the Moon makes it personal this weekend.

There seems to be a question here about how one can take responsibility for one’s actions, and change them as necessary so as not to perpetuate oppression, without becoming a walking apology. There’s also a reminder in this Full Moon to see everyone as individuals who are operating within established institutions with varying degrees of awareness (inner and cultural), and with varying degrees of responsibility for perpetuating systems of oppression.

It’s one thing to rail against a form of institutionalized oppression in general on Facebook; it’s another thing to attack a friend of yours on social media for slipping up and using inadvertently oppressive language — as though they personally are everything that is wrong with our culture. You could probably make contact with that person in gentler, more effective ways (preferably offline).

All of that said, on a more ‘mundane’ (or ‘everyday’) and personal level, Sunday’s Capricorn Full Moon looks like it could be a deeply transformative event. Pluto’s presence indicates considerable power. The question, of course, is how will you use it?

Any Full Moon tends to be felt in interpersonal relationships. So that is the realm in which you may find yourself trying to navigate the energy. Yet no matter what kind of situation you’re dealing with, it’s good to remember that real change is always an inside job. That is, no matter what you might want to modify about someone else, no matter how much they may be at fault in some regard, no matter how intensely you feel that your happiness depends on someone else saying or doing the ‘right’ thing, all you can ever really control is you.

What can you do differently that will feed your soul and make the world a little better? How can you let your inner truth shine through, rather than papering over it with layers of superficial personality? If you’re in some kind of process of transformation, are you consciously allowing it to transpire (whether privately or publicly)? If you’re in a position of power, can you use it ethically and can you harness it in service of the highest good?

You do have power within your life, within yourself. In its highest form, it’s called love.

11 thoughts on “Calling In the Capricorn Full Moon”