This week the Sun aligns with the most important deep space point, the core of our galaxy. You will not read much about this on other websites because the Galactic Core has a way of disappearing. But it is very much there, influencing our lives and our experience of astrology.

This week the Sun aligns with the most important deep space point, the core of our galaxy. You will not read much about this on other websites because the Galactic Core has a way of disappearing. But it is very much there, influencing our lives and our experience of astrology. 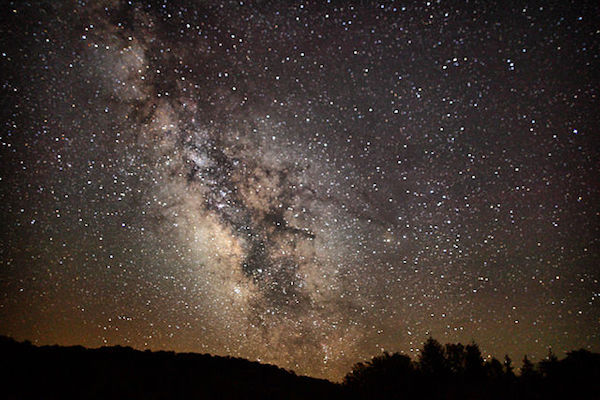 Due to our location out on one of the Milky Way Galaxy’s spiral arms, when we look toward its center, we’re viewing its dust and stars edge-on. This photo of the Milky Way was taken from Summit Lake, West Virginia, by ForestWander (under CC 3.0).

While the exact alignment is on Thursday, Dec. 19, we are under its influence now.

We’re also under the influence of something much more immediate, which is today’s trine of Jupiter and Uranus.

On its face, this would seem like a positive aspect. The thing to remember about trines is that they are resources for anyone to use, no matter what their agenda. The chart for 9/11 has a spectacular trine as well.

While “love is the law,” it also seems that the universe bends to will and desire. Obviously many unloving things happen. The rise of this strange form of Brexit-Trump “conservatism” in the UK with last week’s election of Boris Johnson is an example. Clearly, he has an agenda.

Under potent trine energy like this, you must focus your plan. You must have your goals. Jupiter is also square Chiron. The square is separating but it’s still there. That is an action-oriented aspect, a bit more provocative than a Jupiter trine. Squares push us. Trines say “use it or lose it.”

At the center of the Galactic Core is a supermassive black hole that is 4 million times the mass of our Sun, but smaller than the planet Uranus. If that doesn’t make you put down your coffee and stare out the window in bewilderment, I don’t know what will.

So what is the energy of this thing? Well, it is big. Its influence bends space, time and gravity in all directions.

It’s so high, you can’t get over it. So low you can’t get under it. So wide you can’t get around it, as the old hymn goes. Our Sun is placed about halfway out between the core and the edge of the galaxy. Just like the Sun has a habitable planetary zone where the oceans don’t boil away or freeze, so too does the galaxy — and we are in it. 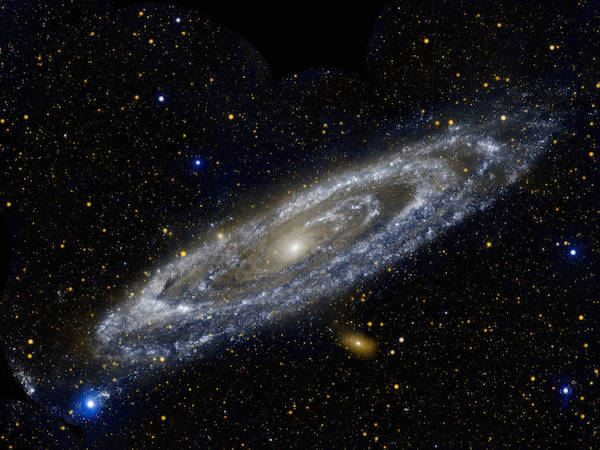 Greetings from the galaxy next door: the Andromeda galaxy, or M31, is our Milky Way’s largest galactic neighbor, spanning 260,000 light-years across. Photo by NASA/JPL-Caltech.

The Galactic Core in many ways defines the cosmic quality of Sagittarius: that sense that there is something going on behind the scenes, some connection to another place and time; that sense of Sagittarius, the Visitor from Afar.

Think of it this way. As one approaches the Galactic Core, the stars concentrate under the incredible gravitational influence of the supermassive black hole. As you get closer, the stars become so dense that it is light both day and night: by day from the local star, by night, from all the other stars.

Stars orbit the galaxy like planets orbit a star. As you get closer to the core, the velocity of stars around the core increase, and they are whipping by. It is incredibly turbulent, yet blindingly beautiful.

If you’re curious about the Galactic Core, Planet Waves did a special edition focusing on it way back in 2007, when Pluto was crossing over the core.

At the end of this week is the solstice: the Sun’s ingress into Capricorn, exact at 11:19 pm EST on Saturday, Dec. 21. (For European readers, the Sun’s ingress occurs early on Dec. 22.) It’s the shortest day of the year in the Northern Hemisphere, a natural time to slow down and conserve energy — yet this year, it leads directly into to a pair of eclipses.

We’ll be covering both the solstice and the eclipses later in the week. For now, be aware that the Sun’s ingress into Capricorn is another step along the way to the grand conjunction of Saturn and Pluto on Jan. 12. All but Mercury will be in place. We are well on our way — to what, exactly, we have yet to discover.