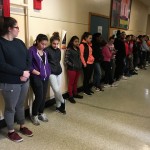 Wednesday, March 14, was the day designated for high school students across the country to walk out of class, in honor of the young lives taken in Parkland, FL, one month ago. Here in Kingston, the school administration decided that instead of a walkout, there would be an event that would “empower the student body, […] 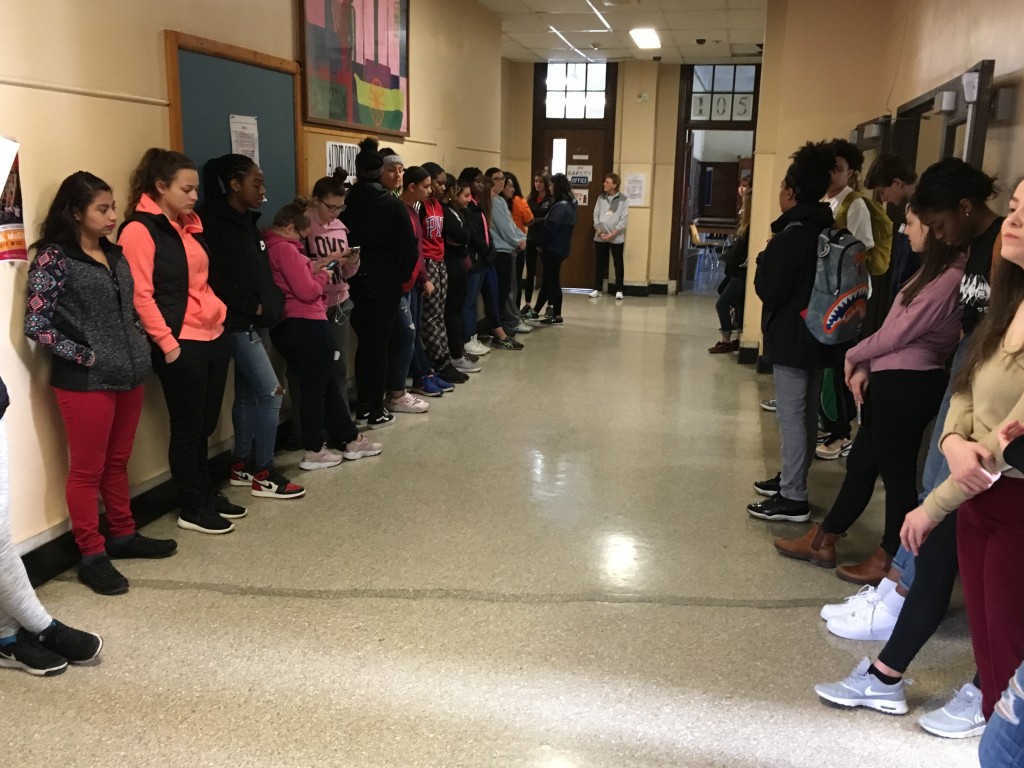 Wednesday, March 14, was the day designated for high school students across the country to walk out of class, in honor of the young lives taken in Parkland, FL, one month ago.

Here in Kingston, the school administration decided that instead of a walkout, there would be an event that would “empower the student body, but also keep them as safe as possible,” in the words of Kirk Reinhart, the principal.

“I am proud to say that we have worked with students to reach a compromise and create a collaborative and respectful event,” which in a letter to parents he called a “peaceful, organized and effective demonstration.”

That event? Students could walk out of their classrooms and stand in the corridors.

I arrived at Kingston High School at about 9:30 am, and encountered a perimeter set up about 75 feet from the front stairs, staffed by a security official named Sean. He told me that press had been pre-cleared for the event, and that I could not enter the building without permission from what he called Crown Street — the district office. I was told to leave the campus or face arrest.

I called the school district and got John Verge, the deputy superintendent. I identified myself as a radio and print reporter, named some of the places I work, and he said he would call the school and authorize my entry.

By then, the security perimeter was moved down to the street. I told a guard standing at the entrance that I had been granted permission to attend the “protest” by the deputy superintendent, as instructed. Eventually, word came around on his walkie-talkie that I was authorized, and he allowed me in.

When I entered the building, I was stopped by the assistant principal. I told him that per instructions of his security guy, I had called the district office and received permission to be in the building.

“I don’t have anything to prove you were cleared by the [deputy] superintendent.” I told him about my call with Mr. Verge a few minutes earlier, and how the guard had let me in when he confirmed that.

“Why are you doing this?” he asked, as if my purpose was to annoy him. I reminded him of the obvious, which is that I was a reporter covering a protest.

He told me to leave the campus, since I didn’t have permission to be there. I went back to my car. Sean, the security official, came and found me as I was driving out. It had all been a mistake, and I was now allowed to come into the building.

I went back in to the building, and was now allowed to walk past the assistant principal and various cops standing around, and joined some students who were holding a kind of silent vigil in the corridor, with their arms linked.

The names of dead students at Marjory Stoneman Douglas High School were being solemnly read off by someone on the school’s PA system.

After about three minutes, another school official came and found me, and said to come with her. She was clearly upset. Her name was Kate Heidecker, the school’s public relations specialist. She, too, claimed I did not have permission to be in the building.

“I got permission 20 minutes ago.”

“For an event of this nature, you cannot ask 20 minutes in advance.”

“What kind of event? It’s a bunch of kids standing around in the corridor.”

Apparently they wanted 100% control over their PR choreography. The editor of the Kingston Times said he had received an email at about 9 o’clock Monday morning — two days, not two weeks, earlier — inviting coverage from “some select media.”

Notably, if their concern was security, nobody patted me down, searched my bag, or wanded me. (The rumor going around was that they were afraid they would have a school shooting at a protest about school shootings — an entirely unfounded concern, based on there being no actual threat.)

Back in the front lobby, the assistant principal was now pleading with me to leave the building. I must have had the vibe that I was willing to get arrested for the story, which would have created a hassle that lasted all week, plus the ongoing publicity about why they busted a reporter who had obtained authorization to be on campus, plus the trial. True enough, I’m willing to get arrested for the story, but I was not in the mood that day.

On the sidewalk outside the building, a student named Xavier had actually walked out of school. He said that the administration had recruited him as a student of color to have input on the in-school “protest,” since all the other organizers were, as he put it, “white girls.” But he was having no part of that.

Welcome to the Free Speech Zone.

Update: Thanks to Cindy Ragusa for tipping us off to this news article — 100 students walked out at 10 am. Well done, kids.

6 thoughts on “Welcome to the Free Speech Zone”