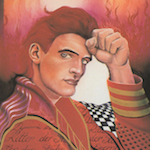 Sarah Taylor explores the presence of the next two Court Cards in a complement that had its genesis in last week’s reading. There are shifts and emergences afoot at the level of how you are expressing yourself as an individual with an emphasis on thought, intellect, beliefs. Oh, and fire. Yes, the heat is rising! 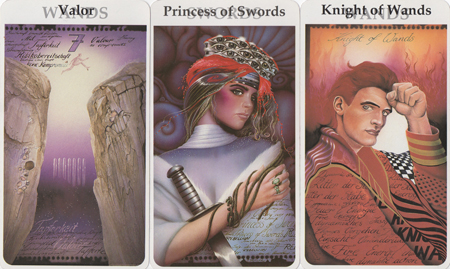 Seven of Wands, Princess of Swords, Knight of Wands from The Röhrig Tarot deck, created by Carl-W. Röhrig. Click on the image for a larger version.

There are shifts and emergences afoot at the level of how you are expressing yourself as an individual with an emphasis on thought, intellect and beliefs. The ‘odd man out’ is the Knight — a Wands card. This denotes both the implied presence (through his absence) of the Knight of Swords, and the birthing of a different emphasis.

How are you experiencing your own evolution from someone who has of late been focused on the mental plane, to one who is now defined by fiery, active, directed creativity? Where is something being birthed from the intellect and asking to be trusted as a force that is more impassioned and intuitive?

More importantly: what risk are you in the process of taking in order to give voice to your beliefs, and to enact them boldly, unapologetically, and in a way that asks you to stick your head above the parapet? Because your act of self-definition and the assumption of an inner authority that burns from the very heart of you will be hard to ignore.

The foundation to this week’s reading is the Seven of Wands. In the card, a figure is seen leaping from one locale to another, negotiating an abyss from which emerges seven Wands. The figure is naked — unarmoured, and without artifice. It is clear from the card that the jump is almost certainly successful.

It is also an act of daring and courage.

It takes a lot to trust the inner force of self-definition and revelation in order to propel yourself to new lands. It takes trust to make that decision when there seems to be no safety net. You are following the calling of your own creativity. That is your map, and little else.

What lies beyond the ledge remains a mystery, save for a growing understanding that there is a voice inside you that is demanding its turn to speak, and a power that is waiting to be expressed.

The writing on the Seven of Wands is the essential message of all three cards. The Seven is the act that defines this statement, while the Princess and the Knight are you, the one who is doing it. The Princess of Swords, as the youngest member of the Court Cards, is the voice of innocence that is unafraid to declare what it sees as truth. She is “Rebellion” embodied, the eyes on her headdress denoting the keen-sightedness that she has — the access to her truth that is untempered by artifice or a dwelling on consequences.

She is beautiful; she is willing to stand out. Her sword is something she is still yet to master, but in one key way she has mastered it: she has freed herself. The rope and chain that once bound her are severed. Her hand, no longer held in check by what she has been told to be — the voices, inner and outer, that restrained her — is liberated. Now, she is able to release herself into the world and seek out the independence that was not possible while she was identified with something that sought to keep her in (her) place.

When I look at both the Princess and the Knight next to her, they strike me as one-and-the-same person. Both have their heads at the same angle; the red on the Princess’s headdress mirrors the Knight’s hair. The inner child and the adult in alignment, one with the new ability to see and speak what she sees, the other coming into his own as a force to be reckoned with, and who is able to find a home in the red-hot flames of Eros without being consumed by them. He is fire, and he is also a space in the fire. He knows how to work with what licks up from beneath, and to contain its energy, so that it is shaped and directed consciously.

So it is time to go back to what I noted at the beginning of this article: the Knight of Swords as an implied presence, given he is the only Swords Court Card not to appear in the three cards from last week, and the three this week. Because he is here, that’s for sure, except his outer expression is one that is distinctly more fiery than he is often given credit for. I see the Knight of Wands as holding that Swords energy along with his fire. He is the emissary for both. What a formidable combination! The potential to analyse and apply wisdom in a way that is unequivocally creative.

That’s you, by the way. Yes. You. What is clear here is that you have started to step — no, leap — into a new relationship with your mind and your artistry that is both courageous and measured. You may not have a clear idea of where you’re going, but it seems you have a far clearer idea of who you are than ever before. And what you’re embarking on has legs; it can take you places.

If you can contain and focus what is moving through you, you have the capacity be a force to be reckoned with. Good going, intrepid traveller!

Astrology/Elemental correspondences: Seven of Wands (Mars in Leo), Princess of Swords (the earthy aspect of air), Knight of Wands (the fiery aspect of fire)