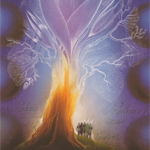 Well, hello! Sarah Taylor discusses how the Five of Cups makes its third appearance in as many readings, bringing you back into a reckoning with what Disappointment has meant to you, and how its presence has shaped you. But now it’s time to start shaping something new. It’s beautiful; and you can access a sense of your own raw (roar) power bring it into form.

Ah, Disappointment. There you are again! But, hey — what’s that? You want to come closer? Just so you can help us experience and understand whether we’ve really got it this time? Why, thank you! 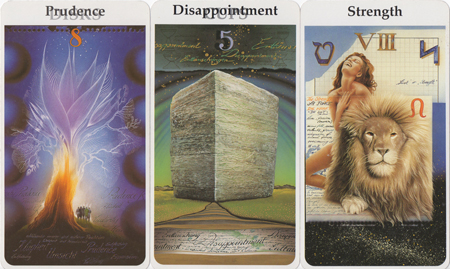 Eight of Disks, Five of Cups, Strength from The Röhrig Tarot deck, created by Carl-W. Röhrig. Click on the image for a larger version.

Yes, I’m being a bit flippant, but the paragraph above holds the gist of the three-card reading in front of us. The Five of Cups is with us again, but with a significant shift in the quality of its appearance from this past Wednesday and the Sunday before that. This is connected both with its changed position in the layout, and the cards that accompanied it on its prior excursions, as well as the ones today.

First, the position. On February 1 and February 11, the Five of Cups was in the third-card position, which more often than not equates to something that’s coming up. It was felt, yes, but the reckoning of that feeling was yet to materialise fully.

Today, Feb. 15, it is in the centre-card position, which puts it at the heart of the matter. In other words, it is in the process of materialising — and by that I mean that you are increasingly becoming conscious of it, rather than there being an objective increase in its intensity. This difference is subtle and important. It is moving into focus; and what you focus on seems to become larger. Keep perspective: know that you are the one who is calling this forward — calling it out. Whether you are aware of it or not, whether you want it or not, a part of you has been waiting for this. You have unfinished business with it.

Second, the accompanying cards. I’m going to focus on two from the two prior spreads, and then the two that are here today. On Feb. 1, we had The Fool at centre. Its presence heralded your stepping into the unknown — taking a new route in the way you negotiate Disappointment. On Feb. 11, we had The Tower at centre. Its presence indicated the dismantling of something that had been built on the false assumptions you were making about love. This dismantling may have felt, and continue to feel, like a loss, a release, or both. Whichever, it was heaven-sent — which has less to do with heaven than it has with a part of you that is connected to an understanding that there is something greater at play than your human wishes and desires. Something that you might not recognise has the capacity to feed you in ways your previous choices may never have offered you.

So, through The Tower, the ground is being cleared for a new reckoning with the Five of Cups. Now that it’s materialising more concretely in your awareness, can you approach it differently? Key to this approach are the qualities available in the two cards flanking the Five: the Eight of Disks, and — another Eight card — Strength. There’s balance in them from the start.

First, the Eight of Disks, or Prudence. You are nurturing something into fragile, beautiful existence that has the ability to sustain not just you, but a group, a community. This asks for dedication and attentiveness. Staying power and a light but firm touch. What you are growing into life is both tangible and magical. It is infused with light while being practical. It could be your tour-de-force.

Bring this awareness to the Five of Cups — the ability to stay the course, to nurture, to sustain — and the sheer rigidity of that central card is shown up for the outdated and unyielding thing that it is. Look at the Eight of Disks and the Five of Cups side-by-side and you’ll understand the contrast, and the felt-sense of the choice available. With Disks and Cups, you’ll be able to tap into your body’s wisdom to discern what is true for you.

And finally there is Strength, card VIII of the tarot’s major arcana.

As a major arcana card, the presence of Strength aligns this reading with the two previous ones (with The Fool and The Tower) and suggests that what you are dealing with is very much part of your life’s journey, your soul path. This is not just about what is happening on a mundane level. This is about how you are negotiating the business of answering the call to grow into yourself — to become the person you were born to become, uniquely you.

The Five of Cups, representing here what has haunted you for so long in matters of the heart — well, it doesn’t stand a chance. Step into your ecstasy — the wisdom of your untamed heart — and roar the remnants of disappointment away. ROAR! Bring the animal into the sacred. I have a feeling you’ll be surprised that you know what you’re doing, at the heft you can wield, and the result you achieve.