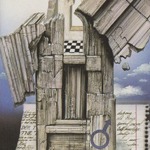 In a reading intended to mark Mercury’s direct motion today, Sarah looks at three cards — one very familiar — that will in some way form the cornerstone of the inner and outer work you have been doing recently. And today marks the change that last week’s reading suggested. Find out what form this takes and what the cards are mirroring to you in terms of how you navigate it.

There is no change from darkness to light or from inertia to movement without emotion.
~ Carl Jung

We have change. From the last reading, we have change. And the Five of Cups is, again, the card around which the others are constellating. Except this time, instead of being faced with the same thing, over and over, we have the tarot equivalent of a spiritual wrecking ball in the form of The Tower. 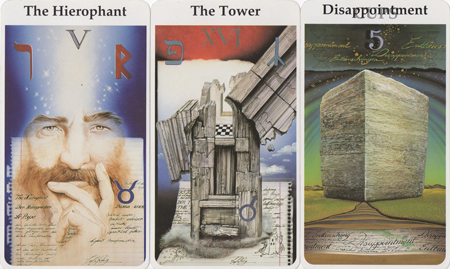 The Hierophant, The Tower, Five of Cups from the Röhrig Tarot deck, created by Carl-W. Röhrig. Click on the image for a larger version.

The Tower is apt to unsettle a fair number of people who come face-to-face with it. If you are one of them, this message is for you: not so fast.

Don’t be so quick to fall into the trap of fear that seems to shadow The Tower wherever it goes. If you are one of them, you’ve only been given half the story — and an over-sensationalised half of the story at that.

Let’s deal with what most of us who know tarot know about The Tower. Let’s look at the concept of “destruction.” C’mon — let’s break it down, in a manner of speaking. Construction; destruction. Building; destroying.

In its most physical sense, The Tower represents a structure that is in the process of being dismantled. This is The Tower when your laptop — and everything you held dear that you didn’t back up — goes kaput! It is the razing to the ground of the inner-city tenement building that seemed like a good idea at the time, but which grew into obsolescence.

It is the (archetypal) fall of the Tower of Babel, a symbol of hubris and ambition that could never reach the heights it intended.

It can also represent the dismantling of an institution — a romantic engagement, a marriage, or a business, for example. In the Rider-Waite Smith version of The Tower, two people are thrown to the ground by the divine lightning bolt of awareness: the union is revealed to have been one that held its inhabitants captive in an ivory tower, one that sought to separate them from their true natures. The illusion is revealed and in its revealing it becomes impossible for the relationship to continue in the way it has. Frequently its form changes significantly.

However, less tangible still, The Tower represents constructs that are being dismantled — ideals, ideas and beliefs.

And in this case, it is the solid, inflexible, heavy construct that you have built around the idea of love, which at the beginning of the month had brought you to disappointment time and time again.

“You do the same thing, over and over; or you change.”

Well, my dear, beautiful Fool, it looks like the time for change is here. You’ve set it in motion through your willingness to step into the unknown. The mystery has indeed brought you into alignment with a current that is powerful enough to blast that block and release you to a different way — a way that leads to:

Can you stay in alignment to let it do its work? This is the realm of The Hierophant, whose presence is a stabilising factor next to The Tower — his own ‘tower’ a column of starlight that reaches from the heavens into his crown.

As “spiritual master, teacher, advisor,” The Hierophant also represents structure, but this is an inner structure whose integrity is based on your connection with a divine source that guides with gentle, unequivocal authority. It is not rigid, yet it is strong. It holds you to account; you hold yourself to account through it. The presence of The Hierophant spells the difference between the notion of “destruction” and the emotions that may accompany that (similar emotions that accompany the Five of Cups), and the idea of “release.”

Sometimes all is not as it first seems. Sometimes, yes, The Tower has its rubbly, crumbling way. Sometimes, though, it is akin to a liberation, the walls falling in the background, with freedom taking centre stage.

For, really, it is The Hierophant who remains through it all with you — guiding, holding presence, the blesser on the path, no matter what that path looks like to you. What is being cleared no longer works; what remains whispers to you an enduring and irrevocable truth. And you’ll know it in the very depths of you when you hear it.