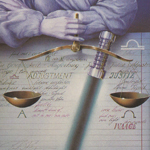 If you’re not already a Core member or have an All Access Pass, this feature now requires registration as a free introductory member.

Another three major arcana cards in five weeks. Do you know how statistically improbable that is? Sarah Taylor looks at today’s cards and picks up where this particular story left off at the beginning of last month. Perhaps you’ll be able to see the parallels taking shape in your life.

On Sunday, March 1, it was pointed out to me by a self-described “math head” commenter that there is a .022% chance of getting three Major Arcana cards in a three-card reading; and I’m taking her word for it.

Today, the reading has defied the odds again in the form of another three Major Arcana cards. Not only that but, whereas last time it featured sequential neighbours The Star (XVII) and The Moon (XVIII), today it features the next card in the sequence, The Sun (XIX). Further, there are also another two sequential neighbours in The Wheel of Fortune (X) and Justice (XI). 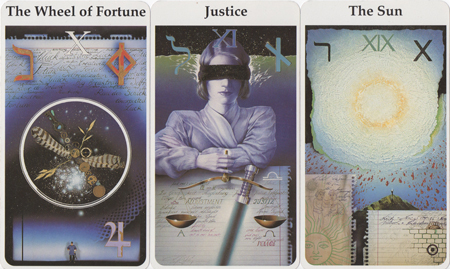 The Wheel of Fortune, Justice, The Sun from The Röhrig Tarot deck, created by Carl-W. Röhrig. Click on the image for a larger version.

Last time, I wrote that “an all-majors reading can have a ‘behind-the-scenes’ quality to it — as if you can feel that there’s definitely something going down but, like a roll of thunder, its origin and direction may not be entirely clear. Although the thunder itself is both heard and felt in your body.”

Baby, that thunder is getting louder. That thunder is rolling outside your door. When it knocks, and you open (and if you don’t, be aware that it comes bearing a compassionate battering ram) be prepared for it to roll through your comfy little home, shaking the dust from the curtains, the spiders from the ceilings, and the shadows from the corners.

That “light of consciousness” that was “temporarily, deliberately, obscured,” which I wrote about in that article five weeks ago? It’s moving into town at high noon and it’s asking you to meet it on Main Street.

But you’re not going to be facing off against some guy in a black Stetson — not literally, anyway. You’re going to be meeting you. All that beauty that you’ve kept hidden in the darkness from yourself and others. You’ll both be standing there, under the Sun, in a divine meeting that has been engineered through the momentum of destiny (The Wheel of Fortune) and the rebalancing of karma (Justice).

Let’s go back and have a look at the journey you’ve been taking in some area of your life to get here.

The foundation of this shift is shift itself: The Wheel of Fortune. Corresponding to Jupiter, the planet of expansion and protection, The Wheel, too, speaks of expansion. It is the expansion that happens when there is a change in your outer (and, very probably, inner) world, which has the result of thrusting you into something new. And so your horizons widen. The thing to look out for here is — much like Jupiter — the idea of too much. Too much movement can be the result of a lack of centring. And when the wheel turns, it tends to serve us better — or, at the very least, to feel better — if we remain close to the centre.

From the position of The Wheel of Fortune, it’s likely that this shift has already taken place. You might still be a little dizzy from it, but you’re now into the territory of Justice. With those first rolls of thunder as the wheel rolled forward, you have been brought before the blindfolded figure of Justice herself. Her lightsabre is neither drawn nor active, but used to steady her arm so that she can balance the scales accurately.

This is not a moment where you are found wanting and asked to pay the price. A much misunderstood card, Justice does not pronounce you either guilty or innocent. Not at all.

Justice is a recalibration of karma based on the movement you have just experienced. What is discarded is associated with what you have left behind; what is added is what you are moving into; what remains is the bridge between the two. And, as this happens, so there is an unveiling of more light: the distant stars constellated behind the Wheel become light-edged waves behind the head of Justice. The torn-out notepaper — nearly a full back-drop in the Wheel — drops lower, resting under the arms of Justice.

And then, finally, that paper drops further, and further still, as the Sun breaks through in the third card.

The Sun interests me today because of the drawings on the two pieces of notepaper. On the first, we have the Sun from the Rider-Waite Smith version of the card, and on the second we have, very faintly, the child riding the horse from that same version. However, going back to the first piece of paper, we also have two figures, both of whom are reaching out to each other. I feel that this ties in with the previous card, Justice, which is associated with Libra, the sign of relatedness.

As adjustments are being made, can you feel that light starting to reverberate? It might get a little hot and sweaty out there at high noon, for sure, but it’s the one show-down you probably won’t want to miss. Those rays are reaching out to you. Maybe you can see what happens when you reach back.