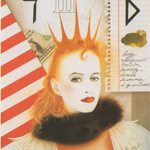 We’re in new territory this week, as Sarah Taylor discusses the implications of an all-major arcana reading, the prevailing presence of the feminine (no matter which gender you are) and what that means, and a shift from an inner focus to one that is directed outwards and into the world.

Whether permanently, or temporarily, we have moved into a different space with this week’s three cards, all of which come from the major arcana — the 22 archetypes that mark The Fool’s, or Joseph Campbell’s Hero’s, Journey.

The probability of drawing three major arcana cards is, alone, worth noting, given that the major arcana comprises well under a third of the 78-card tarot deck (the rest consisting of 56 minor arcana cards). Statistically, therefore we have less than a one-in-three chance of a major showing up. 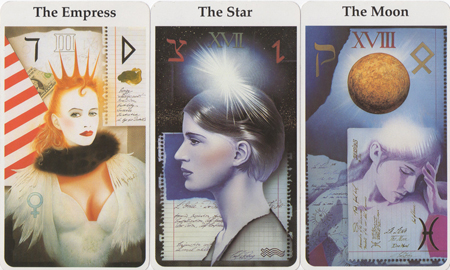 The Empress, The Star, The Moon from The Röhrig Tarot deck, created by Carl-W. Röhrig. Click on the image for a larger version.

The tone of the message is clear: pay attention. Pay attention to how this reading might be showing up. And there’s a good reason to pay closer attention than usual: an all-majors reading can have a “behind-the-scenes” quality to it — as if you can feel that there’s definitely something going down but, like a roll of thunder, its origin and direction may not be entirely clear. Although the thunder itself is both heard and felt in your body.

That’s the key: a major arcana reading is happening at a soul level — or, if you will, at the level of the psyche. That there are no minor arcana cards to ‘pin’ it to a particular situation, event, or person doesn’t mean that it won’t be experienced in your day-to-day life. It’s just that, like thunder, it is more immediately accessible as something formless yet undeniably present. A felt sense, a surge of affect (“[T]he experience of feeling or emotion.“), an inner knowing that ‘shift happens’, a psychic (i.e. of the psyche) movement that isn’t directly attributable to a specific happening, but which colours the outside world with the hue of an emergence.

On the surface, the reading looks exclusively feminine, yet it is not — bearing in mind that all of us, no matter which gender we are, hold both the feminine and the masculine within us. Actually, while The Moon and The Empress are quintessentially feminine, the card at centre, The Star, is androgynous, even if the figure appears to be female. I know that Carl Röhrig, the creator of the deck, based some of his figures on well-known Hollywood faces; and The Star reminds me strongly of Julie Andrews in her Victor Victoria role, underpinning that idea of androgyny, or gender-switching. Aquarius (which The Star corresponds to) is nothing if not the free-thinker.

As a “free-thinker,” however, The Star as a card is more concerned with the mechanism behind that free-thinking than with the thoughts themselves. Let me explain. The card that comes before The Star in the major arcana is card XVI, The Tower, which symbolises the clearing away of what has been built or constructed and which no longer serves. The reason for this? To re-establish flow — not simply internally, but transpersonally: between you and the divine. The Tower clears away the blocks to the presence of a guiding light that is not of you, but wishes to move through you.

The Star is that flow. It is clarity; it is grace; it is inspiration; it is cosmic connection. Your thoughts are freed from the plaque of your distortions, your contractions, your self-reproach. When The Star is present, you are a “free-thinker” because your own wisdom is in alignment with a greater wisdom. This is not subjugation or brain-washing. It is the understanding that somewhere, somehow, you and it are one and the same.

How does this fit with the other two cards? I see a movement from one state to another, mediated by The Star and suggested by the direction in which the figure is looking, and what s/he looks away from.

The Moon is feminine, and also introverted. It is the card of the contemplative, someone who ‘tunes inward’ rather than ‘moves outward’. It is passive, in the same way that the Moon’s light is reflected from the Sun. That’s not to say that nothing is happening, but what is happening happens in the shadows. The Moon speaks of a time when things may feel unclear in the outer world, and so there is a drawing in and a feeling into the watery body of a world that lies beneath and beyond the five senses. The light of consciousness is temporarily, deliberately, obscured. Something at this time has asked to be retrieved from the depths.

The Moon seems to me to be the foundational card to this reading; something you have been in, and which you are currently moving away from. What you retrieved during your time sequestered in the shadowlands has enabled The Star to appear in this reading. If you look at the light on the top of the figure’s head in The Star, it is what was hidden behind the Moon. Now, it has come out, as if from an eclipse. (I am aware, writing this now, that there is a total solar eclipse later this month, on March 20.)

What you are moving towards is The Empress — another feminine card but, as you can see, the extrovert to The Moon’s introvert.

The Empress will not be ignored. She is life bursting into full-blood-bloom. She’s fluffing out her tail feathers, putting on her red lipstick, sweeping her copper hair into a moussed crown, and joining the party. I have a feeling she isn’t going to be easily ignored. And she means business. She is the inspiration from The Star, embodied and lived out. Her eyes are wide open, and she’s sizing the world up.

Or, is she sizing you up? Her raised-eyebrow expression feels like a feathered throwing down of the fur gauntlet: can you try her on for size? What would it feel like to be Empress for a day — or quite a few days? What would it feel like, not to wield your femininity like a mask, but wear it as an innate part of you — something that has emerged from your knowing and an inspiration that you may not quite be able to explain but, like that thunder, is impossible to ignore?

On one level, this reading is about the complexity of feminine identity in all of us, and the way the seas are shifting and revealing a new wave of the experience of her.

On another, though, it is about sensing that and understanding you have access to a wisdom that works through you, and stepping into this revelation as a state to be lived out. This isn’t hypothetical; it isn’t even simply psychological or emotional; it is physical, baby. Bring her through, bring her in — mediated by your own wisdom. Remember — no masks necessary. She, and you, were made for each other.