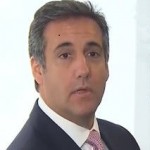 In a potentially major setback for President Trump, a federal judge has rejected efforts from the president to be given first access to documents seized by the FBI last week during raids on the properties of Trump’s personal attorney Michael Cohen, who is being investigated for possible bank and wire fraud.

Trump’s Legal Worries Grow as Judge Rejects Effort for President to Review Docs Seized in FBI Raid
In a potentially major setback for President Trump, a federal judge has rejected efforts from the president to be given first access to documents seized by the FBI last week during raids on the properties of Trump’s personal attorney Michael Cohen, who is being investigated for possible bank and wire fraud. Monday’s court hearing pitted the president against his own Justice Department. Assistant U.S. Attorney Thomas McKay urged the judge to reject the president’s request. McKay said, “Just because he has a powerful client doesn’t mean he should get special treatment.” The FBI seized 10 boxes of documents and as many as a dozen electronic devices from Cohen. According to press accounts, the Trump administration now views the probe into Cohen as a more serious threat to the president than special counsel Robert Mueller’s investigation. Meanwhile, on Monday, Cohen’s attorneys were forced to reveal Fox News host Sean Hannity was also one of Cohen’s other legal clients. Just last week, Hannity slammed the FBI for raiding Cohen’s office and home, but he never disclosed his ties to Cohen.

Deadliest U.S. Prison Riot in 25 Years Shines Light on Inhumane Conditions in Prisons Across Nation
At least seven prisoners died and 17 were seriously injured after bloody violence broke out Sunday night at a maximum security prison in South Carolina. It was the deadliest prison riot in the United States in 25 years. A coroner said all of the prisoners were stabbed, slashed or beaten. Six of the seven were African-American. No guards were hurt. In total, at least 20 prisoners have been killed by fellow prisoners in South Carolina since the start of 2017. One investigation found the number killed across the state’s prisons had quadrupled from 2015 to 2017. The state’s prison agency has also been hit with several lawsuits that outline a “long history of violence” and allege sometimes the violence is “encouraged” by guards.

Hip-Hop Artist Kendrick Lamar Makes History by Winning Pulitzer Prize
On Monday, rapper Kendrick Lamar became the first non-classical or jazz musician to ever win a Pulitzer Prize for Music. Lamar has topped the charts with music that tackles issues of race, politics, religion and even mental health. The Pulitzer follows the five Grammy Awards won by Lamar in January for ”DAMN.,” his fourth studio album. His previous album, “To Pimp a Butterfly,” also won five Grammys. Lamar recently produced and curated the soundtrack for the “Black Panther” film to critical acclaim. We speak to a high school teacher in New Jersey who uses Lamar’s recordings in his classroom.