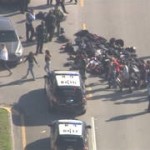 In Parkland, Florida, students and family members gathered for a candlelight vigil on Thursday night to mourn the 17 people killed at Stoneman Douglas High School in Broward County, Florida, in one of the deadliest school shootings in U.S. history.

Trump Blames Mental Illness for Parkland Shooting, Ignores Easy Gun Access & Loose Background Checks
In Parkland, Florida, students and family members gathered for a candlelight vigil on Thursday night to mourn the 17 people killed at Stoneman Douglas High School in Broward County, Florida, in one of the deadliest school shootings in U.S. history. Early Thursday morning, President Trump tweeted, “So many signs that the Florida shooter was mentally disturbed, even expelled from school for bad and erratic behavior. Neighbors and classmates knew he was a big problem. Must always report such instances to authorities, again and again!” Mental health advocates are warning President Trump’s comments perpetuate stigma against people with mental illness, who are more likely to be the victims than the perpetrators of violence.

White Supremacy, Patriarchy and Guns: FL Shooter Had Record of Death Threats, Violence Against Women
Seventeen people were killed and at least 15 other people were wounded Wednesday at the Stoneman Douglas High School in Broward County, Florida, in one of the deadliest school shootings in U.S. history. More evidence has emerged showing that the gunman, a 19-year-old former student named Nikolas Cruz, shared a common trait with many other men who have carried out mass shootings: He had a record of abusing and threatening women. On Thursday, a white nationalist hate group called the Republic of Florida Militia also claimed the gunman was a member who had trained with the militia, but the group’s leader later walked back the claim. Former classmates of Cruz did describe him as politically extreme and espousing racist beliefs.

Cyril Ramaphosa, South Africa’s New President, Known for Moving Profits to Offshore Tax Havens
African National Congress leader Cyril Ramaphosa has been confirmed as the new president of South Africa, after the former leader, Jacob Zuma, resigned from office abruptly on Wednesday night amid a series of corruption scandals. Ramaphosa once led the National Union of Mineworkers under apartheid in the 1980s. He later built a business empire that encompassed mining interests—including the Marikana platinum mine, where police killed 34 workers during a strike in 2012. Ramaphosa is now one of Africa’s wealthiest men, with a net worth of about $450 million. Now, activists are talking about Ramaphosa’s ties to tax havens during his time in the corporate sector. Activist Koketso Moeti is founder of the community advocacy organization Amandla.mobi. Her recent piece for News24 is headlined “The rich can’t steal, right?”