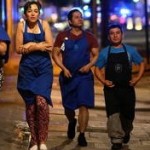 Twelve people have been arrested in London after three attackers killed seven people and injured 48 more on Saturday night. The three attackers were shot dead by police. It’s the third terror attack in the U.K. in three months. British Prime Minister Theresa May has vowed a sweeping review of the nation’s counterterrorism strategy.

Trump Attacks London’s Mayor & Jeremy Corbyn Calls for Theresa May’s Ouster After Terror in London
Twelve people have been arrested in London after three attackers killed seven people and injured 48 more on Saturday night. The three attackers were shot dead by police. It’s the third terror attack in the U.K. in three months. British Prime Minister Theresa May has vowed a sweeping review of the nation’s counterterrorism strategy. All of this comes as the country gears up for national parliamentary elections scheduled for this Thursday. Prime Minister May has also called for increased web surveillance so the internet is no longer a “safe space” for terrorists. Meanwhile, Donald Trump used the London attacks to call for the United States to impose his proposed Muslim travel ban. Discussing all of this with Democracy Now! is Guardian columnist Paul Mason.

Trump Uses London Attack to Call for SCOTUS to Back Travel Ban Blocked by Multiple Courts
Following the attacks in London on Saturday night, Trump launched a tweet storm calling for the United States to impose his proposed Muslim travel ban, which would prohibit all refugees and citizens of six majority-Muslim countries from entering the United States. On Thursday, the Trump administration asked the Supreme Court to revive his Muslim travel ban, which has been blocked by multiple courts. The Trump administration has filed emergency applications with the nine high court justices seeking to block two different lower court rulings that found the ban was discriminatory. “There is no national security justification that the government has managed to produce here,” says Shayana Kadidal, senior managing attorney at the Center for Constitutional Rights.

Could Trump’s White House Bury or Even Destroy the Landmark 2014 Senate Report on CIA Torture?
Is the Trump administration attempting to erase history? On Friday, congressional officials confirmed the administration has begun returning to Congress copies of the Senate’s explosive 2014 report on CIA torture. The move raises concerns that copies of the classified report will now be buried in Senate vaults or even destroyed—and, along with it, lessons from one of the darkest chapters in America’s history. Under the Obama administration, the 6,770-page landmark investigative Senate report was initially sent to federal agencies in hopes it would eventually be made public. Now the reports will be returned to the Republican-controlled Senate. Documents held by Congress are not subjected to laws requiring government records to be eventually made public. Democrats are expressing fear that the Trump administration intends to erase electronic copies and destroy hard copies of the report. Shayana Kadidal is a senior managing attorney at the Center for Constitutional Rights. CCR represents two men named as former CIA prisoners in the executive summary of the Senate torture report released in 2014. Majid Khan and Guled Hassan Duran are both currently held at Guantánamo.

Lawyer for Tortured Detainees: U.S. Created ISIS Through Misguided Detention, Interrogation Policies
Shayana Kadidal talks about an often overlooked footnote in the history of ISIS. Kadidal says the group’s mix of people with religious and battlefield experience was “pulled together in Camp Bucca,” which once hosted thousands of prisoners in Iraq without charge. Many alleged they suffered of torture and abuse by U.S. guards while held there. “We made this. We created this movement and its leadership with our own misguided and amateurish detention and interrogation policies,” Kadidal says, and argues that by keeping Guantánamo open and speaking approvingly of torture, President Trump is running a “long-standing commercial for ISIS.”

As Trump Withdraws from Paris Climate Accord, California Vows 100 Percent Clean Energy by 2045
As Trump announced the United States will pull out of the Paris climate agreement, California’s state Senate has passed legislation to put the state on a path to 100 percent clean renewable energy by the year 2045. California Governor Jerry Brown is in China to lead a conference of states and other “subnational” actors making voluntary commitments to cut greenhouse gas emissions. It is one of dozens of state and local governments committing to fight climate change, and as the state with the world’s sixth largest economy, California is often cited by analysts as a model for its ambitious environmental policy. Nearly 200 U.S. mayors have also signed on to an agreement to uphold the commitments to the goals enshrined in the Paris Agreement.