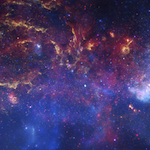 On Sunday, the Sun will align with centaur Pholus and the Galactic Center, just a few days before the solstice and one day before Mercury stations retrograde. Amanda Painter considers the ways this time of year asks us to notice our connection to something larger (and to each other), and how our compassionate gestures can ripple out far beyond our awareness. 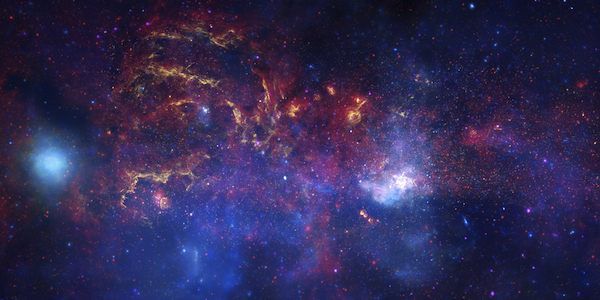 Combined images from the Hubble Space Telescope, Spitzer Space Telescope and the Chandra X-ray Observatory, all pointed into the Galactic Center. Photo by NASA/ESA/SSC/CXC/STScI

How aware are you of your impact on others — especially on the wider world beyond your immediate personal interactions? Come to think of it, how often do you truly get to know your full impact on those individuals with whom you are in direct contact?

I ask because the astrology from now through the weekend seems to emphasize that kind of awareness. 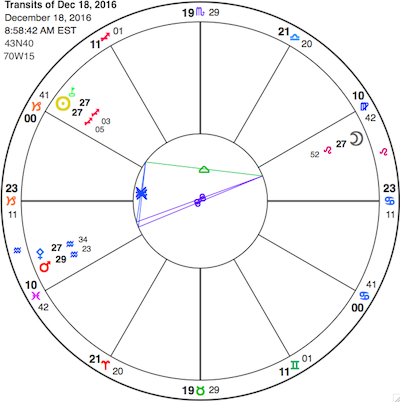 Simplified chart for the Sun conjunct the GC and Pholus in Sagittarius (upper left), trine the Moon in Leo and sextile Pallas-Mars in Aquarius. Time slightly off due to software limitation. View glyph key here.

It’s the sort of thing that frequently gets highlighted this time of year anyway: between appeals from charities that explain how your gift can help others, anecdotes about how a kind word to a store clerk turned their day around, and gifts given with a thoughtful note of appreciation.

Yet separate from holiday inspiration and tax-year urgency, the astrology this time of year also chimes in with a message that can be interpreted along similar lines. This is when the late-Sagittarius Sun aligns with the center of our Milky Way Galaxy, several days before the Sun enters Capricorn for the Dec. 21 solstice.

The Galactic Center (also known as the Galactic Core or GC) is often described by astrologers as a kind of ‘cosmic homing signal’. Large and unknowable, it is the hub that our little solar system slowly orbits, way out on one of the spiraling arms of the galaxy. The GC represents whatever event created the Milky Way. It’s an origin story shrouded in interstellar dust, radio waves and other galaxies.

Even in mystery, however, astrologers can correlate meaning. The GC suggests our shared humanity, universality — even the ideas of ‘home’ and ‘soul’s purpose’ or ‘alignment’.

Yet, as astrologer Shelley Ackerman explained in an article for the 2007 Planet Waves annual edition, a series of major planets aligning with the GC might actually send a message seemingly trying to alert us to how dire the state of humanity is. Surveying the world today, it rather looks like we’re not getting the message.

Except, of course, many, many people have gotten the message and are responding. There may be a lot of problems that we need to come together and solve, and a lot of healing we feel called to begin within ourselves. But the more people there are willing to make their impact on the world as positive as possible, the greater our chances of seeing that impact multiply.

In fact, as Ackerman also notes in that same article, people born with the Sun conjunct the GC often seem to have a special impact on the world. I tend to think that when the transiting Sun aligns with the GC every year, we each have a heightened opportunity to recognize our shared humanity and act on it in life-affirming ways.

This year, that conjunction will be exact on Sunday, Dec. 18, at 8:55 am EST (13:55 UTC). At that time, the Sun will also be conjunct the centaur Pholus in Sagittarius.

Pholus is the ‘small cause, big effect’ planet. To me, this suggests that if you can tune in even a little to that sense of universality and interconnectedness, it could get a real boost in your awareness. Bring that awareness into action, and who knows how far the positive impact could travel?

The Sun, Pholus and the GC have some additional company just as the conjunction is exact: the Moon will be making a fire trine from Leo, adding social and leadership flair, plus an extra dose of compassion.

Also, asteroid Pallas in Aquarius will be sextile the Sun — with Mars in Aquarius, just two degrees away, also in the picture.

It looks like a little group strategizing and work (Pallas plus Mars in Aquarius) could go a long way toward humane goals, should you choose to direct your energy that way. Are you part of a group that does charitable work? Do you feel called to organize even a modest event that could help some people who need a hand? You, too, could be a cosmic social-justice warrior.

Yet in the midst of all that feel-good, do-gooder energy, there are two cautions. One comes in the form of the Sun conjunct another centaur in Sagittarius named Ixion (exact today). Eric Francis has described Ixion’s theme as having to do with a lack of morality: ‘anybody is capable of anything’. How aware of that potential in yourself are you? How conscious are you of your ethics, and when you stray over the line?

The second caution is more basic: Mercury stations retrograde in Capricorn on Monday, Dec. 19, at 5:55 am EST (10:55 UTC). That makes the weekend part of Mercury’s ‘storm phase’. Translation: take your time; stay focused while driving; keep your receipts for anything you buy; double-check the details (financial, verbal, directional, etc.). Anticipate delays and SNAFUs so you can respond with patience and compassion.

With the Sun conjunct Pholus, I’d add to that: watch your alcohol intake. Don’t even think about driving home from that party while buzzed (or let anyone else do so). That, too, is a way to have a positive impact on others — though we often notice the effect due to its tragic absence.

Go ahead and listen for the pulse of interconnection, perhaps standing under a clear December sky full of stars. If you believe that the universe is ultimately friendly, as Albert Einstein asked us to consider, how will you choose to demonstrate it?

One thought on “The Sun, the Galactic Center and You”