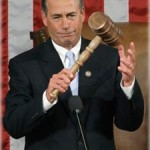 In a stunning and historic move, coming on the eve of the eclipse on the Aries Point, Ohio Republican John Boehner – Speaker of the House of Representatives has resigned. His resignation will be effective as of October 30.

In a stunning and historic move, coming on the eve of the eclipse on the Aries Point, Ohio Republican John Boehner — Speaker of the House of Representatives — has resigned. His resignation will be effective as of Oct. 30. 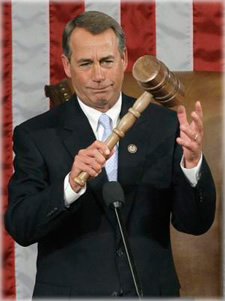 If I had a hammer — John Boehner, the ‘tan man’, is now the outgoing Speaker of the House of Representatives.

Throughout his tenure, it appears Speaker Boehner was interested in the novel thought of retaining his power by making the House of Representatives a functional, working body of the federal government. Extreme members of his own party wanted otherwise. They have threatened to close down the government and brought the world economy to the brink while under his leadership.

In August, a minority of 28 conservative members within his own party placed a “Vacate Chair” motion to remove the Speaker from his post on the docket of the House floor for discussion, but it never came up for a vote. Even though Speaker Boehner had a majority of moderate party members on his side — representatives willing to work with Democrats to come up with a deal for votes, he had lost the confidence of the extreme right within his own party. They wanted to shut down the government by not voting on a spending bill without first defunding Planned Parenthood.

In the mid-1990s a government shutdown cost the Republicans dearly at election time during the Clinton Administration. Shutdowns are highly disruptive. The last one, in 2013, closed off government services including national parks, prevented approval of travel visas into and out of the country, and cut off food stamps and federal paychecks. You could see why they’re wildly unpopular among most Americans, and why Boehner did not want it to happen again while under his watch. Not so close to next year’s elections.

This divide between far-right members and party leadership means a civil war is brewing within his own party when a modicum of party unity was needed to keep the Republican “brand” intact during a Presidential election year. This, perhaps with a little Papal push, ultimately led to shortening his stay.

Instead of resigning at the end of 2016 after the elections as originally planned, he will be leaving this year. This leaves a leadership gap that will be interesting to watch these next few days during the eclipse cycle. Especially given the way the Republicans bend rules to make sure they stay in power.

Yet Speaker Boehner actually did want a Congress that was functioning, despite the behavior of the more extreme factions of his own party. He allowed a vote on the American Taxpayer Relief Act of 2012 (also known as the “fiscal cliff bill”) with only 85 out of 241 Republicans in favor (a support level of only 35%), and the bill passed with the support of 90% of Democrats.

He allowed a vote on aid to victims of Hurricane Sandy to take place without the support of a majority of the Republican caucus. Boehner brought a bill extending the Violence Against Women Act for a vote. He brought a bill for vote on federal acquisition of historic sites, and he allowed a floor vote to reopen the government and raise the debt ceiling — twice. He allowed a floor vote on a “clean” bill funding the Department of Homeland Security. The man resigned because he wanted to make his branch of government work. But the less sane members of his own party didn’t.

We cast a noon chart for Boehner two ways: one in Koch houses and one in Natural houses, the latter of which puts the ascendant of any chart at 00 Aries. (We have no birth time to determine his exact Ascendant). Off the cuff, in his South Node, there is a Neptune-Pallas conjunction in Libra. The Libra conjunction is a good 12-14 degrees from the eclipse degrees, but still — it’s an interesting image of karma, delusion and political strategy in the sign of justice, isn’t it?

His Scorpio Sun and Mercury show a guy who deals in secrets; secret agendas and secret communication and thinking. And like we don’t already know: he’s an emotional expresser.

Also in his chart, there’s a Pholus-Jupiter conjunction in Capricorn, and Cap’s resonance with political institutions and structures is exemplified in his years of public service and leadership. Jupiter and Pholus are both expansive energies, but in Capricorn, ruled by Saturn, they’re likely restricted.

Isabel Hickey says of Jupiter in Cap that these people are concerned with factual matters and getting ahead in the world; that it is “Necessary to learn giving-out-ness for there is a tendency to be miserly with the expression of loving feelings, as well as with money and with material possessions.”

Perhaps too, some Capricorn common sense in the midst of political extremism made him a man out of time with his current, less stable, polarized compatriots. If I were in his position, I would have left, too.

So was his decision a sudden change of heart or a defining conclusion to a decision made long before? There is probably a little of both involved. The news reports suggest that the process leading up to his resignation was under way as early as 2013. This is backed up if we cast a progressed version of his noon birth chart for the date and time of his resignation announcement. That chart shows that his Sun and Mercury have changed sign, and the half-return of his lunar nodes.

However, the eclipse and transiting Mercury are suggestive of the actual decision being sudden. The involvement of Neptune and Vesta imply the spirituality concerned in this matter.

Astrologically, he was already working up to resigning — but the Pope’s visit was like a “road to Damascus” moment. The Pope must have touched a lot of the right strings. Without that he might have delayed the decision indefinitely. The direction of the Republican party has long chafed against his better nature.

Regardless of his birth time, his natal Moon will is in Libra and close to Neptune — that signifies a lot. His natal Moon ruler is Venus — currently being transited for the umpteenth time in the past 5 years or so by Pluto. This man has been undergoing some big changes.

We look forward to comments on the blog. See you there!

(Special thanks to Amanda Painter and Amy Elliot for their astrological contributions to this article! — FB)

8 thoughts on “The Speaker of the House Resigns”