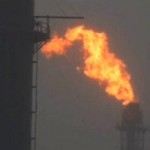 Six days after Hurricane Harvey made landfall, the unprecedented storm is continuing to wreak havoc in Texas and parts of Louisiana. The death toll has risen to at least 38, but authorities expect it to grow as the historic floodwaters begin to recede.

Surrounded by Oil Refineries, Port Arthur, TX Faces New Environmental Crisis Following Harvey Floods
Six days after Hurricane Harvey made landfall, the unprecedented storm is continuing to wreak havoc in Texas and parts of Louisiana. The death toll has risen to at least 38, but authorities expect it to grow as the historic floodwaters begin to recede. Early this morning, a pair of explosions rocked a chemical plant 30 miles northeast of Houston, sending thick black smoke into the air. The Harris County Sheriff’s Office says one deputy was taken to the hospital after inhaling fumes, and nine others drove themselves to the hospital.

Now a tropical depression, Harvey has moved inland, but many parts of Texas remain underwater or under flood watch. On Thursday, the city of Port Arthur, Texas, which is 100 miles east of Houston, was completely underwater. AccuWeather is now projecting the economic impact of Harvey might top $190 billion—exceeding the economic impact of Katrina and Sandy combined. Up to 40,000 homes may been destroyed and 500,000 cars totaled in the storm. According to the Red Cross, more than 32,000 people are in shelters in Texas. Hilton Kelley is the founder of Community In-Power and Development Association in Port Arthur, Texas. He is a former Hollywood stuntman turned environmental activist. In 2011, he was awarded the Goldman Prize, the world’s most prestigious environmental award, for his work battling for communities living near polluting industries in Port Arthur and the Texas Gulf Coast. Port Arthur is home to the largest oil refinery in the nation—the Saudi-owned Motiva plant, which has been shut down due to flooding.

George Monbiot: We Can’t Be Silent on Climate Change or the Unsustainability of Capitalist System
While Houston continues to deal with the aftermath of Hurricane Harvey, we look at the media silence on the human contribution to the record-breaking storm. British journalist and author George Monbiot wrote that despite 2016 being the hottest year on record, the combined coverage during the evening and Sunday news programs on the main television networks amounted to a total of 50 minutes in all of last year. “Our greatest predicament, the issue that will define our lives, has been blotted from the public’s mind,” he wrote. The silence has been even more resounding on climate-related disasters in areas of the world where populations are more vulnerable—most recently, on the devastating floods across the globe, from Niger to South Asia. Over the past month, more than 1,200 people have died amid flooding in Bangladesh, Nepal and India. This year’s monsoon season has brought torrential downpours that have submerged wide swaths of South Asia, destroying tens of thousands of homes, schools and hospitals. Meanwhile, in Niger, West Africa, thousands of people have been ordered to leave their homes in the capital Niamey after several days of heavy downpours.

Deandre Harris Was Savagely Beaten by White Supremacists in Virginia. Why Only Two Arrests So Far?
Another suspect in the brutal beating of a young African-American male during the recent white supremacist rally in Charlottesville, Virginia, has been arrested in Georgia. Alex Michael Ramos, 33, has been charged with malicious wounding for his attack on anti-racist protester Deandre Harris during the Unite the Right rally. Earlier this week, Ohio police also charged 18-year-old white supremacist Daniel Borden in connection to the attack. The police have faced criticism for failing to quickly investigate and arrest Harris’s attackers. Photos and video showed at least six white supremacists punching, kicking and beating Harris with large metal poles. Harris, a hip-hop artist and assistant special education teacher at a local high school, later described the attack in a video filmed by photojournalist Zach Roberts. Roberts also captured photographs of the attack which were used to help identify the assailants.