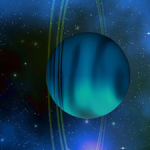 In today’s post I talk about the the impact and influence of the Sun conjunct Uranus. If you’re not already a Core member or have an All Access Pass, the Monday diary feature now requires registration as a free introductory member.

If you’re not already a Core member or have an All Access Pass, the Monday diary feature now requires registration as a free introductory member.

Today the Sun is conjunct Uranus. Uranus was the first planet ever discovered by science, in 1781, and after it showed up, pretty much everything changed. When the Sun aligns with Uranus we can get a miniature version of that. 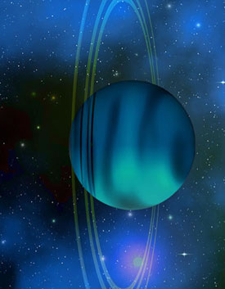 Illustration of Uranus by Corey Ford.

Mostly that change came in the form of machine technology, electrical technology and telecommunications devices. I’ll get back to that in a second.

Be prepared for the unexpected, and to be put in a position where you need to adapt and then adapt again. By adapt, I mean rethink, revise, reinvent, which basically means get assertive about your invention process. Uranus tends to show up when things happen for the first time. You can make this work for you.

Over the weekend, the Sun was square Pluto, which may have felt like a stress test or a moment of get serious. There was also that eclipse of the Moon on Saturday morning, the one I’ve been writing about for weeks. As holiday weekends go, this was a challenging one. It was capped off by an opposition from the Scorpio Moon to Mars in Taurus, which likely added to any stress you may have already been feeling.

Today’s Sun-Uranus alignment in Aries is yet another ramp up. There are two main approaches you can take. In its most common manifestation, Uranus in Aries describes the process of humans being automated, a peril that most don’t know they’re in. That’s because it’s cloaked in the glamour of the very technology that’s doing the automating of its human operators.

Yes, that’s what I’m saying — that even for people who are reasonably conscious, the robotic revolution is taking over your brain, or rather, your self-concept and behavior patterns. It’s possible to be very, very, very aware, and to question everything consciously, and to keep a step ahead of this. It’s possible to track your relationship to that which is striving to make you like it.

You might make a discovery today, as the Sun pairs up with the planet of all that is electronic and ‘revolutionary’ in that way that seems like a breakthrough but is usually more of the same thing. That discovery may come in the form of a disruption that demonstrates the extent to which you’re in the matrix.

From there you might be shocked to your senses and make a few decisions. These might seem like sudden realizations and precipitous choices, though really, what you’re in the process of discovering has been obvious, to some extent, for at least four years. Most of the things that were true then are even more true now.

You might ask what was motivating you then, and what seemed to be preventing you from taking some action that may present itself as plainly obvious today.

27 thoughts on “Sun conjunct Uranus – Eclipse and then Thunder”