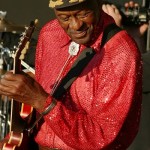 Len Wallick offers a heartfelt tribute to seminal rock-and-roll musician Chuck Berry, who died Saturday in his Missouri home at age 90. Appropriately, his passing took place just as the era-defining Uranus-Eris conjunction in Aries was still exact to the degree, and closely opposed to his natal Libra Sun.

Seminal rock-and-roll musician Chuck Berry died on Saturday (March 18, 2017) in his Missouri home at age 90. Appropriately, his passing took place just as the era-defining Uranus-Eris conjunction in Aries was still exact to the degree, and closely opposed to his natal Libra Sun. 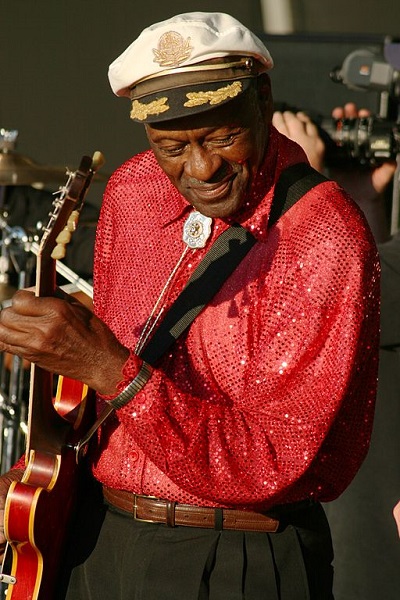 The great Chuck Berry strutting his stuff at Virgin Fest in 2008. Photo by Joe Cereghino.

Born in St Louis on Oct. 18, 1926, Charles Edward Anderson Berry can fairly be said to have defined an unprecedented era. To paraphrase John Lennon, another name for rock-and-roll might well have been “Chuck Berry.” Few are those who would argue with Lennon’s wry observation.

It could also be said that Chuck Berry’s life was reflective of both Uranus and Eris. Further to just a few interpretations of Uranus, he was a revolutionary presence who who reached (and galvanized) billions of people through the medium of radio broadcast.

Consistent with the personality of mythical Eris (the putative “goddess of discord”), both his lifestyle and music provided ample discomfort for those who feared that rock-and-roll constituted a threat to the racially segregated and plutocratic social order he was born into. Thankfully, the alarmed critics perceived Chuck Berry quite accurately.

Chuck Berry was born a black male in an area (and era) rife with institutionalized racial oppression. His parents were not wealthy. His formal education was interrupted (and perhaps defined) by incarceration. For a long time, and in an interesting parallel to another revolutionary and influential historical figure, he made his living as a carpenter. All told, it was not an auspicious beginning for somebody who would eventually be known and honored worldwide.

Only after his first Saturn return was Chuck Berry finally able to combine his cultural legacy with his personal experience and express it far and wide through the universal medium of music. After that, the rest was (and continues to be) history.

Indeed, Chuck Berry’s legacy has for some time been assured beyond any earthly eventuality. Riding aboard both of the Voyager spacecraft launched in 1977 is a gold-plated and playable copper phonographic record. Included on that disc is one of Berry’s best songs: “Johnny B. Goode.” If you are not already familiar with the lyrics, you could plausibly offer a fitting tribute by becoming acquainted with them — they say a lot about both America and one of its most distinguished sons.

If comedian Steve Martin proves prescient, the greatest tribute may be yet to come. In a 1978 televised skit, Martin played a silly psychic who predicted that we would soon receive our first message from extraterrestrial beings who had intercepted one of the Voyagers. The anticipated content of that still-awaited missive was (of course): “Send more Chuck Berry!”