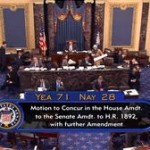 In a pair of early-morning votes, the U.S. House and Senate approved bills to end a brief overnight shutdown of the government. The bill raises military and domestic spending by almost $300 billion over the next two years. But the bill failed to protect immigrants.

Scores of Democratic Lawmakers Join GOP to Back Budget Bill with No Protection for DREAMers
In a pair of early-morning votes, the U.S. House and Senate approved bills to end a brief overnight shutdown of the government. The bill raises military and domestic spending by almost $300 billion over the next two years. But the bill failed to meet the demands of immigrant rights groups—and many Democrats—who wanted protection for young undocumented immigrants whose protections President Trump ended last fall. The House only passed thanks to 73 Democrats who joined Republicans backing the measure. Greisa Martínez Rosas is an advocacy director for United We Dream. She is a recipient of DACA, Deferred Action for Childhood Arrivals.

Olympics Begin with Unified Korean Team Marching Together as Trump Continues to Threaten N. Korea
In Pyeongchang, South Korea, the 2018 Winter Olympics have opened, with North and South Korean athletes marching together at the open ceremonies. The games are seen as a pivotal moment for relations between the two countries, who have been officially at war since 1950. In an effort to de-escalate tensions on the Korean Peninsula, North Korea has sent a 500-person delegation of athletes, musicians and performers to the Olympics. North Korean leader Kim Jong-un’s influential sister attended today’s opening ceremony and shook hands with South Korean leader Moon Jae-in; the pair are scheduled to have lunch together. But as the peninsula tries to de-escalate the threat of nuclear war, U.S. Vice President Mike Pence warned the U.S. is slated to impose another round of sanctions against North Korea.

Lawrence Wilkerson: I Helped Sell the False Choice of War with Iraq; It’s Happening Again with Iran
Fifteen years ago this week, Secretary of State General Colin Powell gave a speech to the United Nations arguing for war with Iraq, saying the evidence was clear: Saddam Hussein had weapons of mass destruction. It was a speech Powell would later call a blot on his career. Is President Trump doing the same thing now with Iran? We speak to Powell’s former chief of staff, Col. Lawrence Wilkerson. He recently wrote a piece titled “I Helped Sell the False Choice of War Once. It’s Happening Again.”