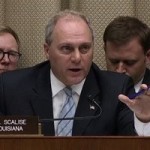 Capitol Hill remains in shock after House Majority Whip Steve Scalise of Louisiana and four other people were wounded on Wednesday, when a gunman opened fire at a baseball field in Alexandria, Virginia. The lawmakers were practicing for a charity congressional game that will take place tonight.

Rep. Steve Scalise (R-LA) in Critical Condition After Being Shot at Congressional Baseball Practice
Capitol Hill remains in shock after House Majority Whip Steve Scalise of Louisiana and four other people were wounded on Wednesday, when a gunman opened fire at a baseball field in Alexandria, Virginia. The lawmakers were practicing for a charity congressional game that will take place tonight. Scalise, the third-ranking Republican in the House, was shot in the hip and remains in critical condition.

Greg Palast: How Racist Voter Suppression Could Cost Jon Ossoff the Georgia Election
The race for the 6th District in Georgia is the most expensive congressional race in U.S. history. On Tuesday, voters will head to the polls to fill the seat left vacant after Tom Price resigned to become secretary of health and human services. Polls show Democrat Jon Ossoff and Republican Karen Handel in a virtual tie. But civil rights leaders fear that racist voter suppression tactics could cost Ossoff the election.

Rep. John Conyers: Why I Am Suing President Trump
Nearly 200 Democratic congressmembers are suing President Trump, accusing him of violating the Emoluments Clause of the Constitution by accepting millions of dollars in payments from foreign governments to his companies while serving as U.S. president. The attorneys general of Maryland and D.C. have filed a similar lawsuit against the president. For more, we speak with the longest-serving member of Congress, Democrat John Conyers of Michigan. He has served in Congress since 1965.

Rep. Barbara Lee on Shootings: We Must Reduce the Hate in This Country
House Majority Whip Steve Scalise of Louisiana remains in critical condition this morning, after he and four other people were wounded Wednesday when a gunman opened fire at a baseball field in Alexandria, Virginia. The lawmakers were practicing for tonight’s charity congressional baseball game when Scalise, the third-ranking Republican in the House, was shot in the hip. The gunman, who was shot dead by Capitol Hill police, has been identified as a 66-year-old white man named James Hodgkinson from Belleville, Illinois. He has a history of being arrested for domestic violence and has also made violent threats online. In one recent Facebook post, he wrote, “Trump is a Traitor. Trump Has Destroyed Our Democracy. It’s Time to Destroy Trump & Co.” Hodgkinson received a license to have a gun earlier this year despite being arrested in 2006 for domestic battery and discharge of a firearm.

Rep. Barbara Lee: Trump Should Keep Open Relations with Cuba, Not Reinstitute Failed U.S. Policy
On Friday, President Trump is expected to announce plans to roll back some of the United States’ new diplomatic and commercial relations with Cuba, which were brokered under the Obama administration. Bloomberg News reports the changes may include curbing travel between the U.S. and Cuba. Other changes may include reinstating restrictions on Americans visiting Cuba and bringing back famous Cuban goods, like cigars and rum. Officials also say Trump might demand the extradition of people who have received political asylum in Cuba, like Assata Shakur.

Rep. Barbara Lee: In Expanding Global Wars, Trump Is Creating More Havoc and Chaos & Has No Strategy
U.N. investigators say U.S.-led bombing has killed 300 Syrian civilians over the last three months in the city of Raqqa. A U.S.-led bombing campaign in Mosul has also reportedly killed dozens of Iraqi civilians over the last week alone. For more, we speak with Democratic Congresswoman Barbara Lee of California. In 2001, she was the lone vote against the Authorization for Use of Military Force after the September 11 attacks.