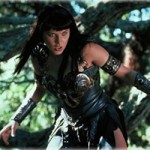 In lieu of Amanda Moreno’s column this week (she plans to be back next weekend) I thought I’d offer readers two of Eric’s previous columns on Eris to help you navigate the weekend’s conjunctions. Featured here are Eris Notebook: Dancing with Discord; and Rachel Maddow: The Apotheosis of Eris.

In lieu of Amanda Moreno’s column this week (she plans to be back next weekend) I thought I’d offer readers a couple of Eric’s previous columns on Eris. Eris — the planet ‘responsible’ for Pluto’s demotion in astronomy — is encountering conjunctions from Mercury (exact yesterday) and the Sun (exact today). 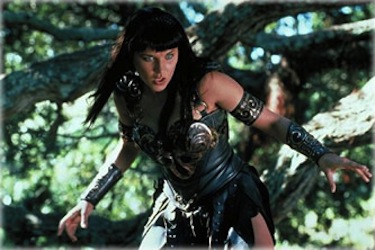 Lucy Lawless as Xena the Warrior Princess, after whom Eris got its temporary, provisional name after being discovered. Photo courtesy of Pacific Renaissance Pictures Ltd.

As you feel for what form your inner Eris is taking this weekend, and sort out how to work with the themes her archetype represents, these pieces may give you some context and points of orientation.

In Eris Notebook: Dancing with Discord, Eric offers a brief history of the discovery and naming of Eris before diving into the Chiron-Eris conjunction of the early 1970s. The modern feminist watershed of that era explains this conjunction perfectly. Eric writes:

Many things occurred during that era, but for sure it was the watershed of modern feminism. Feminism is not just about women’s rights. It is about deconstructing the known order of the world, which tends to largely be based on gender roles. When you suspend or even question gender roles, you basically get a form of chaos. It’s impossible to see the extent to which people cling to those roles until you take them away for a moment or two.

Another way to get a more tangible sense of Eris is through the chart of a famous person. In Rachel Maddow: The Apotheosis of Eris, Eric uses the occasion of 2010’s Sun-Eris conjunction to investigate the natal chart of Rachel Maddow. 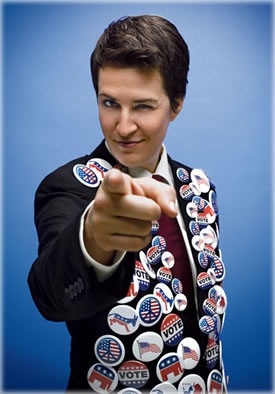 Rachel Maddow in a PR photo.

Born in 1973, Maddow not only has the Sun conjunct Eris in her chart, but those two bodies are also still conjunct Chiron — plus, Venus is right there, too.

In the case of Maddow, we don’t so much get the fractured/chaotic/snubbed quality of Eris. What we get is a sense of what it looks like when someone (especially a woman) embodies the positive aspects of Eris. Maddow is self-assured; and while she stirs things up, it seems to be a result of her simply being who she is, fully and with awareness — rather than a shadowy, passive-aggressive form of provocation.

As Eric writes, “In the form of Rachel Maddow we have an example of someone expressing the [Eris] energy clearly, authentically and in a way that challenges us to wake up and pay attention.”

If you’re paying attention to the Eris archetype in your life this weekend — either in shadow form or in a fully conscious, embodied, productive form — I welcome your comments below.

Please note that the two articles featured in this post come from the archives of Planet Waves’ membership subscription service. These editions, emailed every week, form the core of the fantastic resources you receive when you sign up for our Core Community Pass. You can read more about what’s included in Core Community at that link. Have questions? Email Chelsea at chelsea@planetwaves.net, or give Planet Waves a call at 877-453-8265 (or 206-567-4455 from outside the US).

Without these for-pay services, this website could not be here hosting your favorite authors and some of the most relevant, astute, inclusive and growth-oriented (and ad-free!) conversations on the Internet. I hope you’ll consider signing up. — Amanda P.

8 thoughts on “Reacquainting with the Castaway Self through Eris”