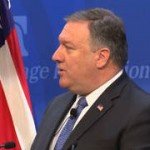 On Monday, Secretary of State Mike Pompeo used his first major policy address to threaten Iran with “the strongest sanctions in history.” Pompeo presented a list of 12 “basic requirements” for a new nuclear treaty with Iran.

Pompeo Threatens Iran With Strongest Sanctions in History, Speeding U.S. March Toward War
On Monday, Secretary of State Mike Pompeo used his first major policy address to threaten Iran with “the strongest sanctions in history.” Pompeo presented a list of 12 “basic requirements” for a new nuclear treaty with Iran, including “unqualified access” to all nuclear sites and an end to its interventions in Yemen. This comes just under two weeks after the Trump administration withdrew the United States from the Iran nuclear deal. “Pompeo and Bolton have made the choice for the international community much, much easier,” says Trita Parsi, founder and president of the National Iranian American Council. “Either you collaborate with the Trump administration and go along with these sanctions, walk away from this nuclear deal and speed up this march toward war—or you resist.”

British Royals Rebrand with Royal Wedding, but Critics Say White, Neoliberal Monarchy Needs to Go
Prince Harry and Meghan Markle were married Saturday at Windsor Castle in a ceremony that many heralded for celebrating black culture and history. Markle is biracial, divorced and a self-proclaimed feminist. The wedding featured a sermon about slavery, poverty and the enduring power of love by Bishop Michael Curry, the first African American to preside over the Episcopal Church. The British royal family is a “celebration of wealth, of elitism, of privilege in the hands of the few, of all the resources concentrated in the hands of a very small percentage of the country. In that sense it very much represents the current economic order in which we all live,” says Priya Gopal, a university lecturer in the faculty of English at the University of Cambridge.

Royal Wedding Celebrates Black Culture, But U.K. Gov’t Has Been Targeting Black Immigrants for Years
While the royal wedding has been heralded for celebrating black culture, the British government is facing ongoing scrutiny for hostile immigration policies that have targeted black immigrants. Last month, British Home Secretary Amber Rudd resigned amid an escalating scandal over how thousands of Caribbean immigrants who have lived in Britain for decades are facing discrimination and deportation despite having legally immigrated to Britain after World War II. Known as the Windrush generation, many of the immigrants never formalized their citizenship after they immigrated from former British colonies. Now, following harsh new anti-immigration laws enacted in 2012, many of them are facing eviction, unemployment and the possibility of deportation. The British government has admitted that more than 60 people may have been wrongfully deported. Gabrielle Bruney is an editor for Esquire. Her new piece is “The Royal Wedding Celebrated the Contributions of Black Britons, but it comes amid a scandal rooted in the British government’s mistreatment of Caribbean people.”

President Trump Is Not “Above the Law”: John Bonifaz Warns Against Normalizing Impeachable Offenses
Top FBI and Justice Department officials have confirmed they will meet with congressional leaders to review classified information on the handling of special counsel Robert Mueller’s investigation into potential ties between Russia and the Trump campaign. This comes after President Trump demanded an investigation into whether the FBI infiltrated his presidential campaign. Trump has claimed for months, without evidence, that the Obama administration spied on his campaign. Legal experts say his tweet Sunday crossed a line by applying overt presidential pressure on the Justice Department, which could possibly set up a clash similar to the one between President Nixon and the Justice Department during the Watergate scandal.  The finding of wrongdoing by Trump could ultimately be referred to Congress and make impeachment a topic of debate among candidates in the midterm elections, though few Democratic leaders have openly supported it. This comes as Texas Democratic Congressmember Al Green doubled down on his effort to impeach Trump, a year after he first announced he was drafting articles of impeachment.