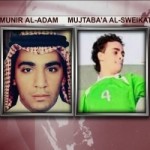 As Donald Trump vows not to let human rights concerns interfere with U.S. relations with Saudi Arabia, the country is set to execute 14 men, including Mujtaba’a al-Sweikat, who was only 17 when he was sentenced to death five years ago.

Outrage Mounts as Saudi Arabia Plans Imminent Executions for 14 Accused Pro-Democracy Protesters
As Donald Trump vows not to let human rights concerns interfere with U.S. relations with Saudi Arabia, the country is set to execute 14 men, including Mujtaba’a al-Sweikat, who was only 17 when he was sentenced to death five years ago. He had planned to visit and attend Western Michigan University but was detained by airport authorities in Saudi Arabia for allegedly attending a pro-democracy rally earlier the same year.

How Education Secretary Betsy DeVos Undermines Civil Rights & Favors Predatory Lenders Over Students
Randi Weingarten, president of the American Federation of Teachers, discusses recent developments with billionaire Education Secretary Betsy DeVos, a longtime backer of charter schools and vouchers for private and religious schools. DeVos said earlier this month that she wanted to return the Education Department’s Office for Civil Rights “to its role as a neutral, impartial, investigative agency.” An official with the office came under fire last week after she said that most campus rape claims amount to two young people who are “both drunk.” Meanwhile, attorneys general in 18 states are suing DeVos and the Department of Education over a rule to protect student loan borrowers that was set to go into effect on July 1, until DeVos announced a “reset” of the rule, known as “borrower defense to repayment.”

In Precedent-Setting Trial, Lawyers Say Arizona’s Ethnic Studies Ban is Discriminatory & Illegal
We go to Arizona, where a hearing is underway that will decide whether a ban on ethnic studies which eliminated the Mexican-American studies program in Tucson schools is unconstitutional. In 2010, Arizona passed a controversial law banning the teaching of any class designed for a particular ethnic group that would “promote resentment toward a race or class of people.” Following the passage of the bill, then-Arizona Superintendent of Public Instruction John Huppenthal ruled in 2011 that the Mexican-American studies program violated the state law, despite an independent auditor’s finding showing otherwise. The Tucson Unified School District ultimately suspended the acclaimed Mexican-American studies program in 2012 under the threat of losing up to $14 million of funding if they allowed it to continue.

From Pence to Price: How Big Tobacco Gained Massive Influence Under Trump, Plans to Expand in Africa
From Vice President Mike Pence to Health and Human Services Secretary Tom Price, a new Guardian report exposes how Tobacco companies have gained unprecedented influence in Washington since the Trump administration came to power. Politicians with deep ties to the tobacco industry now head the U.S. Health Department, the top attorney’s office and the Senate, even as tobacco use remains the leading preventable cause of death. The series also looks at how U.S. and British tobacco giants are trying to expand their global market, especially across Africa.