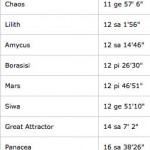 This is an article introducing the Nuclear Axis chart — the chart for the beginning of the nuclear age. The chart is for the first time scientists created a self-sustaining nuclear reaction, the kind that would be necessary for the creation of atomic bombs or their incestuous first cousin, nuclear power. I am republishing the Nuclear Axis article for astrology students who would benefit from knowing this chart exists, and what its implications are. –efc

This is an article introducing the Nuclear Axis chart — the chart for the beginning of the nuclear age. The chart is for the first time scientists created a self-sustaining nuclear reaction, the kind that would be necessary for the creation of atomic bombs or their incestuous first cousin, nuclear power. The article we posted earlier, Chernobyl: Witnesses Near and Far, includes the chart of the explosion at the reactor. It is what you might call a classical Nuclear Axis chart, with planets piled up across the critical degrees of Gemini and Sagittarius. There was also a lunar eclipse about two days before, during which key (bad) decisions were made. I am republishing the Nuclear Axis article for astrology students who would benefit from knowing this chart exists, and what its implications are. –efc 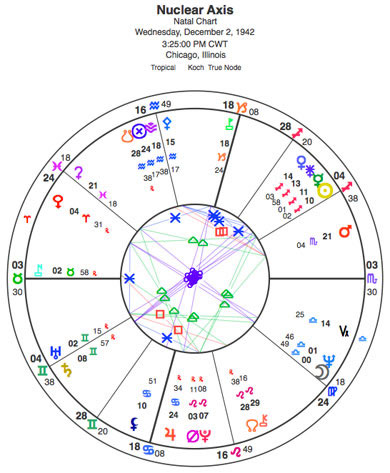 Nuclear Axis — the chart for the first self-sustaining atomic reaction.

While we’re on the nuclear topic, this is a good time to get the conversation going about the Nuclear Axis. For more detailed background and some chart examples, check this old article I wrote for Star IQ. The Nuclear Axis chart is the chart for the first self-sustaining atomic pile, created in a secret lab under an athletic field at the University of Chicago toward the beginning of the United States’ involvement in World War II. This was part of the Manhattan project.

What we have is a chart for the Nuclear Age. It is exceedingly rare to have exact data for such a profound event in the history of humanity, particularly given that this one happened under the cloak of absolute secrecy.

The ‘axis’ part of the chart is the opposition from Gemini to Sagittarius. This is fairly easy to see: you know the glyphs for Gem and Sagg, and the planets are connected by a series of purple lines that form the axis. In Gemini we have Uranus and Saturn; in Saggitarius we have Sun, Mercury, Juno and Venus. Not shown in mid-Sagittarius is the Great Attractor, an inter-galactic point. The ominous thing about the Sagittarius alignment is that it has themes of international and death; as well as obsession, and lots of money.

Indeed, after WWII in many respects the entire economy would be based on the vast expenditures of the nuclear industry — all those bombs and airplanes and personnel and missiles that needed to be developed and countless spies and so on and on — and all the apparatus of defense that had to be erected around the nuclear arsenal: indeed the whole military industrial complex.

Now, what tends to happen is that when planets line up in the early- to mid-degrees of any mutable sign — Gemini, Virgo, Sagittarius, Pisces — there is a nuclear effect of some time. Like most things in astrology it’s not 100%. And it can have odd manifestations. The most intense activation of the nuclear axis came at the time of the 911 incident: Saturn was in Gemini and Pluto was in Sagittarius, splat on the axis. We had a huge false flag terrorist attack, and the crime scene was called Ground Zero, a term borrowed from the lexicon of nuclear warfare.

That was a close call and if you ask me it was a form of mitigated karma. Based on the astrology, that incident could just as easily have involved an atomic device, such as a dirty bomb. But the effect is dependable enough. 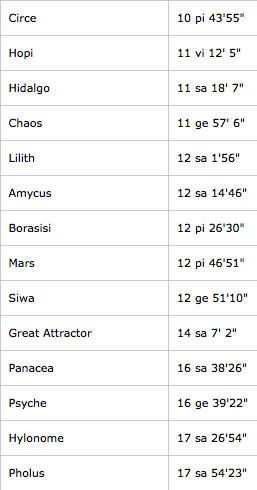 Minor planets in the Japan quake chart: placed on a 90-degree dial aligned approximately with the Mars-Borasisi conjunction. In other words these are the points that are conjunct, square or opposite the conjunction.

The Nuclear Axis is again getting transits. Here are the planets at the time of the quake. Now, what we see here ain’t the Saturn-Pluto conjunction — thankfully. But we do do have the involvement of several slow movers (Chaos, Borasisi, Pholus) and a quick mover: Mars. Chaos speaks for itself; were there ever an issue that qualified for the Borasisi effect of wishful thinking, that would be nukes. Nuclear power is not a technology — it’s a religion. It is addictive. By splitting the atom, people have come as close as they can to ‘playing god’, and it seems that once ‘scientists’ get into this, they never really come out of it.

Like the fictional religion from which the name Borasisi comes, nuclear power is a religion of lies. I wish that were an overstatement. There is simply nothing true about nuclear power, except that the atom is split, water is boiled and sometimes electricity is made. The truth stops right about there.

I would point out a few other features of this chart as discussion starters. One, look at the Moon-Neptune conjunction. That describes the emotional impulse of the deception involved. Note that the Noon and Neptune are in very early Libra, exactly opposite the Aries Point, suggesting the scale and size of the deception, and revealing how personal the situation really is when you look at it honestly. Any time we get a transit to the Aries Point — such as Uranus opposing that Moon right now as it has just entered Aries — we will stir up this chart.

Next, Chiron is prominent: it’s on the North Node, like a kind of warhead. It is in the last degree of Leo, along with the Node in the next to last degree of Leo. Have a look! It’s easy to see; they are both orange points with high numbers (in the high 20s on a scale of 30).

Next, Pholus is on the midheaven — just like two charts we’ve seen recently: the self-immolation that started the revolution in Tunisia; and the shooting earlier this year in Tucson, AZ. Pholus is, appropriately, in Capricorn: the sign of matter itself, the structure of matter, and in the house of government. Pholus represents that which cannot be contained once it’s released. Gee whiz! Look, it’s even in green. Right spot-on in the MC.

Right where it will stand as a warning — unfortunately unacknowledged, but known at the time to minds the likes of Einstein — to be extremely careful with this technology, indeed, not to go there because once the nuclear age begins it never really ends.

I have never taken a close look at this chart with the centaur planets in (and if I did, I didn’t understand them at the time). I have to say this is just wild, to have centaurs covering the ascendant, the midheaven and the North Node; and the degree rising predicting the discovery of the first centaur some 35 years later.

The centaurs are all about raising awareness, and this chart is saying nothing if not pay attention.