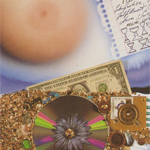 This week, Sarah Taylor explores a major theme that has been shaping up over the course of the year — one that is both personal and collective. This particular manifestation focusses on how you might have been nourished in the past, and how you can choose to nourish yourself differently in a way that has a new, and marked, effect on your life.

Here’s an interesting fact: every single reading so far this year has had a major arcana card in the first card position. That means we have had four consecutive readings with a thematic archetypal card on the left — indicating that the foundation to what we are entering into with each reading is soul-based. 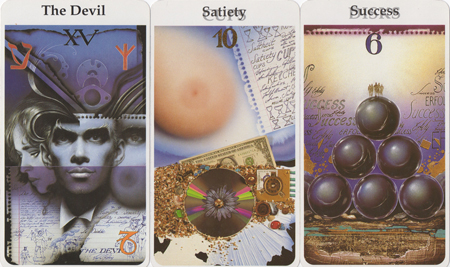 The Devil, Ten of Cups, Six of Disks from The Röhrig Tarot deck, created by Carl-W. Röhrig. Click on the image for a larger version.

Put another way: all four readings may well be dealing with the ins and outs of our lives, yes; but they are also dealing with what is going on behind the scenes on a psycho-spiritual level. The day-to-day is the façade that overlays the playing out of something deeper. What you are doing — who you are choosing to be in every moment — is having a greater impact than you might know.

This is because major arcana cards are telling you something about how you, as an individual, both impact and are impacted by the collective. There is a paradox at work (when isn’t there?). That is: how do you appreciate and live out being part of a greater whole while also remaining true to who you are as a unique expression of life?

Let’s see how this is taking shape in the present through the cards in front of us this week.

When I showed this spread to one of my colleagues and collaborators, their first response nailed it, in my opinion: “Boobies everywhere.”

The Ten of Cups is also known as “Satiety.” It is the card of family, and inherent in that is the idea of nurturing. Next to The Devil, however, and linked by the two breasts, side-by-side, you come face-to-face with the idea of nurturing in its shadow form: it asks you to look at what stifles, what neglects, what ‘nurturing’ means to you when you look inside the closet of your life and ask the question,

What it is that I have turned to to nourish me that did not nourish me in the conventional sense? What is it that was offered to me that I suckled from when I had little or no choice, because it was all that was available?

And, more important, “How can I transform this understanding into something that really can feed me? How does owning the shadow that my family mirrored to me — which is mirrored in the idea of the ‘families’ that we are still part of — give me the tools to start finding new ways to satisfy, to fulfil, myself?”

The Ten of Cups is the last numbered card in its suit. Something is full up; it has to shift. There is a movement towards emptying out so that there is room for the new. If what filled you was ‘devilish’ in its own sense, you have the opportunity now to replenish your cup — the vessel of your heart — with something altogether more conscious, and more aligned with your needs and desires.

What this has the potential to lead you to is the Six of Disks, or “Success.”

Much like the repeat visits by major arcana cards, the Sixes have also been having their day in this column. Last week, on Jan. 11, we had a Six card at centre: the Six of Swords — itself a reappearance from its presence in the reading of Dec. 14. More significantly, on Jan. 1, we had the Six of Disks in the same position as this week, which suggests that what you were working towards then is still very much in your sights and still coming along your path towards you.

The Sixes in tarot refer to the resumption of forward motion after the pause of the Fours and confusion of the Fives. The Six of Disks is that resumption as it expresses itself in your world — so this movement will be felt outwardly. Here, it is felt as a gathering.

There is a saying that you can choose your friends but not your family. In this reading, it is refined into the idea that you may not have been able to choose who was the caretaker of your emotional needs in your family of origin, but you can create something different now, which supports you in a new way — one that holds your heart, tends to it, stands by you and shares in your achievements.

It starts with you.

It starts with acknowledging your experience; what it has, and has not, given you; and what it has shown you about what you need to give yourself in order to thrive. If you do this, coming up soon is tangible feedback that the steps you are taking are ones that have the ability to enfold you in a new way of belonging.