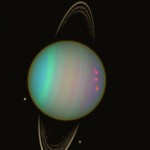 With only six days to go until Uranus leaves Aries and enters Taurus — and only five until Mercury stations retrograde in Pisces — it’s reasonable to call out again an undercurrent of agitation or instability, mixed with a little mental and emotional fuzziness or diffuseness. As Amanda Painter describes, a four-way Pisces New Moon conjunction brings in themes of merging and surrender.

I feel like it’s been weeks now that I’ve been experiencing and mentioning some kind of edgy or energized sensation to the astrology; I do sometimes wonder if it’s just me, but I’m pretty sure that’s not the case. With only six days to go until Uranus leaves Aries and enters Taurus — and only five days until Mercury stations retrograde in Pisces — I think it’s reasonable to call out again an undercurrent of agitation or instability, mixed with a little mental and emotional fuzziness or diffuseness. 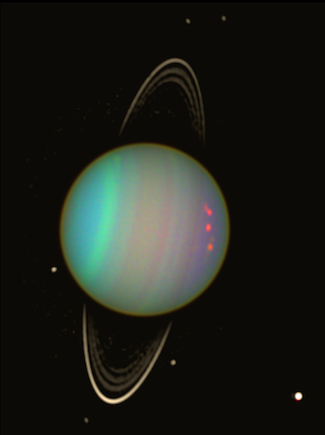 False-color view of Uranus from NASA’s Hubble Space Telescope in August 2003. The brightness of the planet’s faint rings and dark moons has been enhanced for visibility. Photo by NASA/Erich Karkoschka (Univ. Arizona)

I was not available to watch the Congressional hearings for Michael Cohen, Pres. Trump’s former “fixer,” due to other obligations; but I imagine the current astrology was well reflected in those proceedings. Apart from any true surprises, from what I can tell there’s an intriguing backlash afoot, in the form of people saying, “Well, if he admits to lying previously to the authorities, why should we believe him now?”

As I suspect Eric will also point out, this response is to be expected in our age of “believe whatever you want, as long as it’s contrary to what the ‘other side’ believes.” Regarding the actual repercussions of the hearings, I am curious to see whether the fallout becomes more tangible after Uranus moves into earthy, fixed Taurus — and whether Mercury’s upcoming retrograde proffers what looks like a reversal, but then turns out not to be. Time will tell.

Also of note: about seven-and-a-half hours or so after Uranus changes signs, there will be a New Moon in Pisces on March 6. I’m still getting a feel for that chart, but the big thing that stands out (other than Uranus in Taurus) is a very close four-way conjunction in Pisces of the Moon, the Sun, Vesta and Neptune.

The conjunction is so close, it spans less than one entire degree of the zodiac. I’ll be giving that cluster more thought, but at first glance it appears to describe a pretty soft-focus, watery, slippery sensation or moment. As in, the kind of experience where what’s conscious and unconscious can be challenging to parse out — same with what’s tangible, embodied and real versus what’s intuited, interpolated, extrapolated, or flat-out made up.

Does Vesta’s presence there imply a safe container for this experience? Possibly. Although I would expect Neptune to dissolve boundaries more strongly than Vesta can hold them. Vesta here might relate more to surrendering to the experience or to oneself (a form of devotion); in which case what is sacrificed is control over every detail and outcome.

Whatever the experience alluded to here may be, it appears to suggest a level of merging that could be quite pleasant or quite destabilizing. Can a person hold space for another’s process of this sort while they themselves are experiencing similar? I’ve never done LSD, but my very limited experience of mind-altering substances in the company of others who are doing the same (one particularly notable situation occurring at Burning Man) suggests that this is possible — though it takes awareness and conscious choice.

I’m not advocating experimenting with drugs during the New Moon next week, merely trying to draw a parallel to one way that chart might be interpreted. If anything, with Uranus in an earth-sign making a trine to Pholus in Capricorn for that event, there might be an indication to be extra-careful with mind-altering substances. Taurus and Capricorn are two signs known for their solidity, not for their flexibility. With Uranus full of surprises and disruptions, and Pholus associated with dangerous intoxication and runaway effects, I tend to see their presence as a reminder to stay grounded to balance all that Pisces power.

We’ll have more about the Uranus ingress / Pisces New Moon chart in the Sunday night mailing, along with some reminders to help you keep a handle as Mercury prepares to station retrograde (this weekend — or sooner — would be a good time to get things sorted financially, for example). A couple of notes about standout astrology between now and then:

Venus is preparing to ingress Aquarius tomorrow at 11:45 am EST (16:45:14 UTC). Yet its current position is likely contributing to the ongoing edginess I referred to at the beginning: in the last degree of Capricorn, Venus is making squares to Pallas in Libra and Uranus in Aries.

There’s tension here — the kind that benefits from your ability to take some action — yet the key would seem to be found partly in how you answer some questions. For example: do you feel like you’re holding back some emotion because it’s at odds with the way you think your relationships must be balanced? Are you desperate for additional stimulation in a relationship, but feel like all you can manage is the kind of friction that causes arguments? Are you dying to flirt with someone but feel restricted somehow?

If you’re feeling this kind of tension, where exactly is it coming from and how can you channel it productively? The current Venus-Pallas-Uranus configuration is called a T-square; the sign that would make it a grand square (or grand cross) is Cancer, but there’s nothing in the last degree of Cancer. So how can you provide the emotional flow, the caring, the sensitivity or the protective nurturing that might balance the other urges you have?

Something’s gotta give; chances are expressing your feelings about it will help things move. If you’re concerned about potential fallout, remember that as uncomfortable as it can be to get something out in the open that you’ve been avoiding discussing, it usually does feel better once you get to the other side of the conversation.

Note also that Venus tends not to be at its most effusive in Aquarius. You may want to watch out for letting sexual habit substitute for passion these next few weeks (Venus moves on to Pisces on March 26). You might need to supply the lovingness to go with your ethical stance, or make an extra effort at warmth to buoy your calmness in sensitive situations. This sign change could also offer some needed detachment to counter the Pisces New Moon dynamic.

But Venus in Aquarius is also said to be an excellent placement for friendships and working in groups. Given that we’re all in this together — and given the hollowness of the term “friend” in this era of anti-social social media — anything that can reinforce teamwork and cooperation has the potential to bring worthwhile things into the world. The primary factor governing such outcomes is whether each of us is willing to work for the common good of all, rather than of just a few.

7 thoughts on “Merging with the New Moon; Uranus Makes its Move”