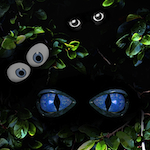 Rob Moore’s interactions lately have felt a lot like life in the wild. From lessons offered by ‘the dog whisperer’ Cesar Milan, to a woman whose aggressive behavior mimics an exotic bird, to the delicate matter of scented co-workers and lovers, he sees reasons to get in touch with your inner beast and supply some of the earthiness the sky is lacking.

I recognize the essence of all sorts of creatures within my day-to-day dealings. Canines are all over the place. They love to literally sniff other beasts but are also adept at sniffing out what’s hidden from view. Lots of felines are around, too. They tend to act nonchalant and disinterested, all the while plotting their surprise moves. 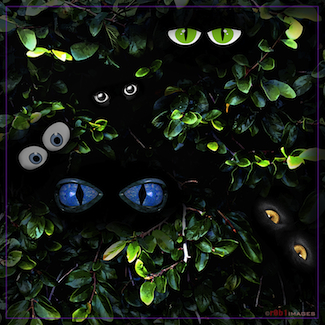 “In the Thick” by Rob Moore.

Oh, and I would be remiss if I didn’t mention the rhinos. Watch the rhinos. They stand there, seeming to only take up space. Until they whip around one day and show you how much force they’re capable of wielding.

I suppose I should explain what all these animal analogies are about. My interactions lately have felt a lot like life in the wild. Among other things, it has seemed like a primal fight for dominance is constantly up ahead just waiting to be provoked. This has had me sticking very close to meditation and doing what I can to get clear before heading into the thick of it. As a result, I have perceived that actually being more beast-like myself may be in order. Quite possibly for you, too.

As Eric discussed in detail on Planet Waves TV, this weekend’s New Moon and mutable grand cross speak to every one of us on some level. He also alludes to the possibility of ‘wtf?’ types of events that could leave us confused but which are best met with taking command of things rather than bending to dictated outcomes. Eric talks of using not only our “emotional intelligence” but also all our faculties. I think this is where our more primal natures can figure in, which I see as also falling under the current Mars in Scorpio umbrella.

I must tell you that I have not been enjoying the recent astrological climate. Any glimmer of gratification I have experienced is akin to the deep relief and rise in self-confidence that ‘The Dog Whisperer’ Cesar Milan must feel every time he goes head to head with a red-zone dog, successfully transforming the circumstances. Definitely not something I want to go through every week, and I doubt Cesar does, either.

For the record, Cesar Milan has been one of my greatest inspirations. Although I don’t get to see his show much anymore because The National Geographic Channel isn’t available in the middle of Hollywood for some reason (I mean, seriously??), I recognized in him many years ago someone here to uplift consciousness.

What I so love about Cesar is that he has found — or has been gifted with — the perfect means to teach humankind a new way of relating. Although communicating with dogs has always been his banner activity, in the process he has taught even those of us without dogs the energetic essence of our everyday communication beyond words. Be that with animals or fellow humans.

To that point, the standout behaviors I’ve encountered lately have at their center rather primal energetic messages. These behaviors are, 1) disgruntlement seeking an outlet and, 2) physical cues signifying sexual desire despite words or counteractions that spell out something else entirely.

Considering the latter, this is the very reason sex clubs have always offered the more fulfilling experiences for me than other avenues. With no manipulative pick-up lines involved — or lines meant to be read between — what we’re all experiencing there is about as straightforward as it gets. And indeed our more animalistic instincts come forth more freely.

If I have a life mantra it is, “Balance in all things.” In this light, what the more ‘down-and-dirty’ scenes such as sex clubs and sex gatherings generally lack is deeply gratifying emotional interaction. It exists there. I have experienced it more than I ever thought I would in these environments. It tends to be fleeting and quite random, though. Building an emotionally supportive situation requires a different set of factors.

So creating a space for increased emotional connection is where my focus has been of late. And I think — particularly with Mars back in Scorpio — I have perhaps taken this more ‘civil’ bond building as far as it needs to go for a while. For this reason, my higher guidance can most likely see I need to ‘balance the beast’, so to speak.

If this likewise rings true for you in any way, that would totally make sense to me. As mentioned, I’ve encountered a lot of primal energy out there lately, much of it lost for a way to express itself. Finding a completely safe and sane way to release such instincts might do a lot of us a lot of good.

Despite the presence of three sign-ruling planets in earth signs, the current astrology is overwhelmingly emphasizing the water, fire and air signs. I believe this may be a dynamic that looks to us to provide the missing link to address any imbalances. In my estimation, this means getting down and being one with some real earthiness.

Literal earth activities like gardening, digging, hiking or climbing may well serve as gratifying outlets. And, of course, sex. While we’re at it, might I suggest trying something ever so slightly more beastly than usual?

Regardless of what the astrology is doing, something I’ve noticed that affects interactions of all types is the imposing of perfumes and colognes into an environment. Co-workers subjected to a strong fragrance wafting through the room — or right beside them — can create underlying friction. In addition to being unable to do anything about the smell, what creates the most tension is the fact that talking to someone about what they smell like is one of the last big taboos. Whether it’s cologne or lack of bathing, it’s a conversation most people are not willing to have. Therefore, they just sit on the pent-up feelings until the day they go completely off about something seemingly unrelated.

Bring this perfume/cologne dynamic into an intimate situation and the friction is heightened. What may seem like ‘just not having chemistry’ may well be someone trying to get the fuck away from smelling — and tasting — after-bath splash all up in everything. I know I’ve been there… trying to hurry it up and get the hell out.

So maybe ‘slightly more beastly’ could mean sex with no outside fragrances. I’m all for starting off shower-fresh, mind you. But the pheromones we each naturally emanate are something naturally attractive to those with whom we share genuine chemistry. Personally, I don’t want anything messing up such a primal and exciting process. If it’s a new idea for you, this could be a great time to give it a whirl.

If my recent interactions are indicative of any kind of collective vibe — even if sex and intimacy are the last things on anyone’s mind — animal-like reflexes seem to be afoot. I’ve been caught off-guard more than once this week by reactions way bigger than the issue at hand.

A ‘wtf?’ conundrum that tangled me up the other day had me stopping cold, unsure how to proceed, yet feeling very strongly that it was important to stand my ground. Let’s just say it was about one person’s religious insistence in stark contrast with the other’s contradictory firsthand life experiences. It became rapidly clear within all this metaphorical horn-locking and eye-gouging that only a non-verbal approach beyond the level of brain calculations could ever hope to restore any kind of peace.

After much consideration about the underlying animal nature of the person involved, I’ve concluded she has the life essence of some exotic bird. One minute she’s playful and intriguing and the next she’s squawking and pecking at your face.

Truly, the facts of the situation that arose between us are virtually irrelevant. It was all about perception and fixation, which resulted in fear and confusion. As if trying to communicate with a flighty bird, here’s how it went down:

– The bird’s tail knocked over a glass of water.

– I instinctively dove down to get it.

– This startled the bird, which instinctively dove at me and started flapping its wings wildly.

– My instinctive ducking to avoid a pecking and the shadow of the bird’s wings startled the bird to an even greater degree.

– The bird drew back and gave me one good hammer on the skull before flying off to its hiding place in the attic.

The irrational nature of the display left me stunned for hours. Slowly, it became clear that to address all this effectively would require taking this to a higher level than the altercation itself.

And so I did not go chasing after the bird. Nor did I sit around waiting for it to fly down from its perch. Once I gathered my wits, I literally stood on my own two feet and offered this convoluted ball of entanglement to a higher level of consciousness. Not just ‘my guidance’, either — the highest possible guidance. There was just way too much going on that surpassed anything I could ever call ‘understanding’. In turn, I could feel the power shifting from what was utterly ridiculous to what was supremely sublime.

Knowing that the argument was unwinnable — by either of us — I abandoned that idea entirely. I did not know how this would resolve, I just trusted in whatever greater wisdom encompasses us both. As it turned out, upon next meeting, the issue had clearly been dropped. Only an unspoken agreement to let each other honor our own calling hummed between us.

So in the event of any beastly displays, I’m all for taking a page from the Cesar Milan playbook. He wouldn’t try to argue with an animal or explain his point of view. No, no. He would merely ground himself in his personal power energetically, rather than getting pulled into a power struggle. Doing so free from force or ill will, he’s able to stay present and meet the animal on a level it can relate to.

In a big way grounding ourselves in our energy is our most primal way of relating. So whether we’re dealing with surreal exchanges or magnetic attractions, I recommend meeting any beasts on the same level. Peacefully, of course. Energetically, of course. In all our dealings, there’s a whole lot going on beyond words.

6 thoughts on “Meet The Beasts”