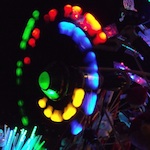 Mars-Pluto comes with a warning label. And though it can express itself constructively, we live in a culture where many people go around with very little awareness and very little sense of their own creative power to change and direct their lives. So take the warning to heart.

Whether you’re celebrating or trying to pick yourself up and dust yourself off after Tuesday’s elections, note the palpable tension still in the air. It’s not all politics, and it’s not just you; for one thing, we have the Taurus Full Moon today (Thursday). But something even bigger is brewing. 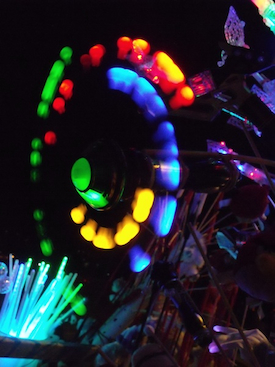 Exact at 5:23 pm, the Moon in Taurus opposes the Sun in Scorpio. This is the Taurus Full Moon.

Any interpersonal situation where material possessions, shared resources/money or sex is concerned — especially if one or both of you is feeling some fear around there not being ‘enough’ — may be feeling especially polarized right now.

Consider grounding yourself today with activities that put you in touch with your body. In any stalled intimate situations, things may begin to resolve themselves later in the evening.

Even so, we’re still in a potential hot zone. This is thanks to Mars working into a conjunction with Pluto in Capricorn, exact Nov. 11 (and shortly thereafter, a square to Uranus in Aries).

Mars-Pluto comes with a warning label. And though it can express itself constructively, we live in a culture where many people go around with very little awareness and very little sense of their own creative power to change and direct their lives. So take the warning to heart.

Mars-Pluto, especially in a sign that represents structure, limits, institutions and the past, could be explosive. Mars and Pluto both represent power: to barrel ahead toward what one wants; to dismantle and rearrange; to become aggressive; to end “what is” and leave the field open for whatever may come next.

Your job, then, is to become your own personal Bomb Squad. Rather than wait for something to blow up (your temper, job, relationship, tire) it’s up to you to get very familiar, starting now, with where the tension is building. Consider anything that you’ve known for a long time needs to change; something with its roots in the past, or in a structure that isn’t truly working for you anymore despite your attempts to just keep going along.

Watch for rumblings of impatience, frustrated desire, goals once pushed aside, an urge to blame your own stasis on the people or systems you’re enmeshed with — anything along those lines. Anything that makes you think, “I’m not sure how much more I can take.”

You can then get out your inner toolbox and try making conscious decisions (minus the emotional charge of a blow-up). This means taking conscious action. Deciding, “I want this to change” without actually putting steps in motion is not going to get you far with this astrology. Mars is the planet of action; remember this.

Yet that’s where the positive expression of a Mars-Pluto conjunction comes in: when you’re willing to step out of denial, make your decisions and take steps to change what’s reached its limit in your life, this astrology will propel you along. If you tend to take a couple steps toward what you want and then stall out, you’ll likely benefit from using the energy this weekend in very practical, tangible ways.

Doing so takes some passion, motivation, vision and discipline — which often seem in short supply. But we’re getting an infusion as we approach Tuesday.

Note, however, that Uranus in Aries squaring Mars and Pluto introduces an element of surprise and the potential for reactionary backlash. Whether that comes from someone close to you or your own ego, it’s another line of gunpowder into the configuration for you to tend to.

Speaking of ego: Mars and Pluto are also exactly conjunct the asteroid Narcissus. Using Mars-Pluto consciously to change what needs to change in your life is an act of healthy self-love. Ignoring the warning signs and letting things blow up in your life only ‘serves’ you to the extent that it compels others to rush to your aid and get caught up in your drama — which is rather narcissistic if you think about it.

8 thoughts on “Mars Conjunct Pluto: Get Constructive, Not Explosive”