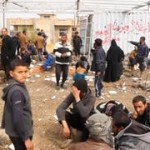 It was 15 years ago today when the U.S. invaded Iraq on the false pretense that Iraqi President Saddam Hussein was hiding weapons of mass destruction. The attack came despite worldwide protest and a lack of authorization from the United Nations Security Council.

“It Was a Crime”: 15 Years After U.S. Invasion, Iraqis Still Face Trauma, Destruction & Violence
It was 15 years ago today when the U.S. invaded Iraq on the false pretense that Iraqi President Saddam Hussein was hiding weapons of mass destruction. The attack came despite worldwide protest and a lack of authorization from the United Nations Security Council. At around 5:30 a.m. in Baghdad on March 20, 2003, air raid sirens were heard as the U.S. invasion began. The fighting has yet to end, and the death toll may never be known. Conservative estimates put the Iraqi civilian death toll at 200,000. But some counts range as high as 2 million. In 2006, the British medical journal Lancet estimated 600,000 Iraqis died in just the first 40 months of the war. The U.S. has also lost about 4,500 soldiers in Iraq. Just last week, seven U.S. servicemembers died in a helicopter crash in western Iraq near the Syrian border. The war in Iraq has also destabilized much of the Middle East. Former United Nations Secretary-General Kofi Annan and others have directly blamed the U.S. invasion of Iraq for the rise of ISIS.

Undocumented and Unpaid, Until Now: Houston Day Laborers Fight Wage Theft After Hurricane Harvey
After Hurricane Harvey dumped more than 50 inches of rain on Houston six months ago, tons of moldy debris had to be removed, and the nation’s fourth-largest city is now beginning a multi-year rebuilding process. Much of the work is being done by undocumented immigrants, who make up at least half of the Texas construction workforce. But even as their work is in high demand after the storm, many are facing widespread wage theft. Few of them report the abuse, because they fear deportation if they go to police because of state’s so-called “show me your papers” law that allows police to ask anyone in their custody their immigration status.

Voices from Houston After Harvey: Immigrant Homeowners Say Little to No Help Coming from FEMA
In an on-the-ground report from Houston, Democracy Now! producer Renée Feltz speaks with immigrant homeowners who faced heavy flooding during Hurricane Harvey and say they are recovering with little or no help from FEMA, even though their U.S.-born children are living with them. Many faced FEMA inspectors who did not speak Spanish.