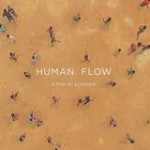 The United Nations says there are now more refugees worldwide than at any time since World War II. The journey and struggle of these 65 million refugees is the subject of Chinese artist and dissident Ai Weiwei’s epic new documentary, Human Flow.

“Human Flow”: World-Renowned Artist & Activist Ai Weiwei on His Epic New Documentary on Refugees
The United Nations says there are now more refugees worldwide than at any time since World War II. The journey and struggle of these 65 million refugees is the subject of Chinese artist and dissident Ai Weiwei’s epic new documentary. It’s called “Human Flow.” For the documentary, Ai Weiwei traveled to 23 countries and dozens of refugee camps.

World-Renowned Artist Ai Weiwei on His Childhood in a Labor Camp, Art, Activism, Prison & Freedom
Ai Weiwei has been called the most powerful artist in the world—and the most dangerous man in China. Born in 1957 in Beijing, he spent his childhood and youth in a hard labor camp in the Gobi Desert in remote northwest China. As a student at Beijing Film Academy, he first became involved in art and activism. He spent his twenties in New York City and then returned to China. In 2008, after a massive earthquake in Sichuan, China, Ai Weiwei launched a citizen investigation to collect the names of the more than 5,000 schoolchildren who died, partially as a result of the highly shoddy government construction of the schools. While his citizen investigation catapulted him to international fame, it also enraged Chinese government officials. In 2009, his popular blog was shut down. A few months later, police broke into his hotel room and attacked him, punching him in the face and causing cerebral hemorrhaging. In 2010, Ai Weiwei was placed under house arrest, after the Chinese government demolished his studio. Then, in 2011, he was arrested at the Beijing airport and held for 81 days, without any charges. Chinese authorities seized his passport and refused to return it until 2015.